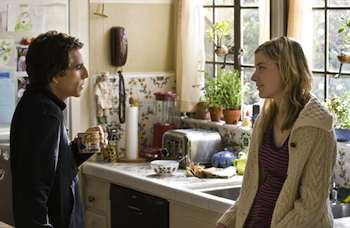 The spiky, socially phobic specimen at the center of Noah Baumbach's extraordinary new comedy "Greenberg," starring a reborn Ben Stiller, is 40 years old and recovering from a breakdown.

He's a sometime carpenter and a one-time musician who blew his chance at a recording contract back in his 20s.

Within the two-month framework of writer-director Baumbach's story, which responds to the push and pull of its characters rather than confining them to a conventional outline, Greenberg asserts himself as a card-carrying member of the most unsettled and disoriented subgroup of American urban citizenry: the New Yorker recently relocated to Los Angeles.

"All the men out here dress like children," Greenberg observes, itching to leave the premises of a friend's birthday party. "And all the children dress like superheroes."

Greenberg spent much of his young adulthood having his musical ambitions shredded in L.A.

Now he has returned, from New York, to house-sit for his brother, who has a lovely house in Hollywood Hills with a pool used by some neighbors with distressing regularity. Greenberg doesn't like that. He doesn't like much, at least not for a daringly long stretch of this uncompromising film, such as why his old friends have "moved on" and acquired the conspicuous baggage of life -- relationships, children, routines -- while he has not. He does, however, get the appeal of his brother's personal assistant, Florence, whose conversational style is a unique blend of directness and hesitation and who is played by Greta Gerwig.

In various independent films, many of them lousy, the off-center beauty has acquitted herself as an actor who knows no artifice.

"Greenberg" should secure for Gerwig the wider audience she deserves. Tangibly, meantime, she has helped Stiller regain his footing as an actor of exceptional comic gifts.

This is the least shticky role Stiller has played in many years, and he responds with a performance as clean and strong as the one Jim Carrey gave in "Eternal Sunshine of the Spotless Mind."

By some twisted stretch of the genre "Greenberg" is a romantic comedy.

The way Greenberg (few seem to refer to him by first name) and Florence get together, it's like two lost L.A. souls passing in the night, then realizing it was a mistake, then backing up again. The initial sex is rushed, and as with Florence's earlier one-night stand with another man, the camera takes careful note of what is, and is not, happening on Gerwig's face as she realizes a step or two has been skipped en route to the sheets.

"I've gotta stop doing things just because they feel good," she scolds herself at one point. The line hurts: We have not seen much evidence of good feeling, sexual or otherwise, coming from this charming, vaguely blurry character. Gradually, with a delicate mixture of comedy and pathos, "Greenberg" brings Florence and the title character to a place where they know each other a little better, and know themselves a little better for good measure.

Cinematographer Harris Savides captures the relentless, rather terrifying sunniness of L.A. without ignoring the smog. Baumbach's script and direction has brought out the best in everyone on-screen. As Greenberg's friend, Ivan, Rhys Ifans is allowed to underplay and respond intuitively to his cohorts.

"It's huge," Ivan tells his friend at one point, this idea of embracing "the life you never planned on." What Baumbach has accomplished in his last three films is also huge. "Greenberg" surely will repel plenty of Stiller's fans who know him best from products like "Meet the Parents." Those who resisted Baumbach's earlier studies in relational tyranny, "The Squid and the Whale" and "Margot at the Wedding," may stagger out of "Greenberg" muttering of lawsuits, providing they stagger in to begin with.

But the film has a curious warmth and optimism at its core, I think, partly because Gerwig's Florence is such a distinctive creation. And partly because in the eternal gulf between L.A. showbiz dreams and L.A. reality, dreamers -- even Greenbergs -- can learn to embrace the unplanned and move on.

MPAA rating: R (for some strong sexuality, drug use and language).