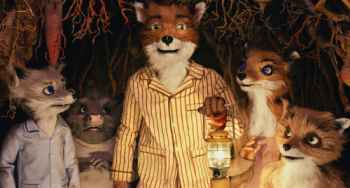 So many careful and clever visual felicities dot the landscape of Wes Anderson's animated feature "Fantastic Mr. Fox," from the catastrophically inclined watercolors painted by Mrs. Fox to the autumn breezes ruffling various species of animals' fur just so, I'm flummoxed as to why the movie left me feeling up in the air, as opposed to over the moon.

Partly, I think, it's a matter of how Anderson's sense of humor rubs up against that of the book's author, Roald Dahl. It's also a matter of how the fox at the center has been altered, from a roguish but essentially heroic savior (in the 1970 original) to a more arrogant wiseacre, as voiced by George Clooney. The fox's exploits are depicted as chapters of a rollicking life, often witty but a little underpowered in its narrative. I have no idea how kids will respond to that narrative. And I realize, as I type this, that many of the charges leveled against Spike Jonze's "Where the Wild Things Are," though not by me, point to what I resist about "Fantastic Mr. Fox."

This is an experiment worth debating because it's the work of a filmmaker worth debating, and while his latest is a foray into proudly old-school stop-motion animation, it is an Anderson film through and through. When a newly invented character, insecure young Ash Fox (voiced by Jason Schwartzman), bickers, or rather, mutter-bickers, with his high school science lab partners, it's like a vulpine outtake from "Rushmore," the 1998 Anderson comedy in which Schwartzman took the leading role. When Mrs. Fox, voiced by Meryl Streep, casually drops the news that she's pregnant, Mr. Fox -- who has been struggling to leave his chicken-stealing ways behind and make peace with his "respectable" job as a newspaper columnist -- is left momentarily speechless, a frozen, tooth-baring smile plastered on his furry face. Anderson frames this reaction shot in his trademark head-on, deliberately stiff fashion, at once deadpan and wryly heightened for effect.

Dahl's story was suspenseful simplicity itself, Fox and family and friends in a life-and-death battle with the farmers whose poultry and foodstuffs have been pilfered, regularly, by the animals. The war gets pretty grim; the foxes and their comrades are driven underground and to desperate measures.

The screenplay by Anderson and co-writer Noah Baumbach creates a new set of complications for this framework. Son Ash's rivalry with a visiting cousin, Kristofferson (Eric Anderson), underscores the theme of familial strife no Anderson picture is ever without. Mr. Fox betrays his wife in sneaking off for "one last big job, on the sly." These are promising starting points, and the craftsmanship is impeccable. Animation director Mark Gustafson, cinematographer Tristan Oliver and production designer Nelson Lowry conspire to create a bucolic dream life, threatened by the venal farmers (Michael Gambon voices the baddest of the trio, Mr. Bean). No less so than Anderson's previous film, "," "Fantastic Mr. Fox" establishes a hermetic, slightly suffocating comic universe and populates it with characters trying to find their place in that world, or an escape route out of it.

The voice work, like the voice work in "Where the Wild Things Are," exists in a realm of throwaway naturalism. No "cartoon" delivery here. The film would rather be caught dead than caught dumbing down for kids, though with its aggravating interpolation of the Beach Boys' "I Get Around," Anderson manages to dumb down, with an overexposed tune, every which way. (The orchestral bits are by composer Alexandre Desplat, one of the best working today.)

If only Mr. Fox were a more interesting character! Then, I think, the story's resolution would be more than merely quaint. Clooney's amusing in motormouth mode, but Anderson and Baumbach fail to make Foxy's glibness much fun. The self-knowing irony seems ill-suited to Dahl's traditional story interests.

Many disagree; the film has plenty of ardent admirers. I will revisit it sometime. For now, though, I rank it roughly alongside Anderson's "The Royal Tenenbaums" -- lower than the great "Rushmore," higher than "The Life Aquatic With Steve Zissou" -- in its slightly twisted formalism and sporadic, occasionally inspired comic returns.

MPAA rating: PG (for crude and sexual content, and for language including a drug reference).