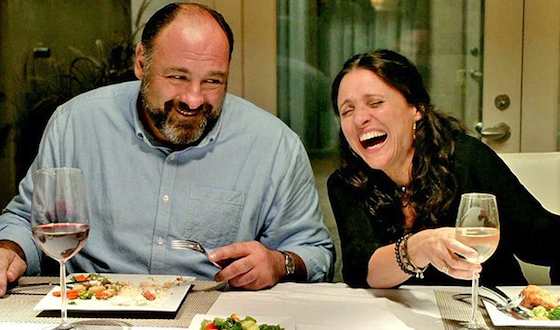 James Gandolfini died at age 51, and it's still a terrible loss, all these years later. Consider writer-director Nicole Holofcener's "Enough Said" to be a fond farewell.

The bearlike actor with one of the most instantly identifiable voices in popular culture co-stars opposite top-billed Julia Louis-Dreyfus. The film's minor but skillfully made and generous in spirit.

Gandolfini's sweetness, detectable even when he was exploring his best-known role (Tony Soprano), emerges in "Enough Said" in full flower, reminding us once again that he had range, size, instincts and a lovely way of serving the material.

Like Holofcener's "Lovely & Amazing" and "Friends With Money," "Enough Said" skips around various neighborhoods of greater as its characters stumble through their heart's desires.

Louis-Dreyfus is Eva, a divorced massage therapist with a daughter (Tracey Fairaway) heading off to college. Eva's skittish about re-entering the dating pool. At a party she meets Albert, played by Gandolfini. Sparks don't exactly fly, but their senses of humor complement each other.

Albert's a TV nerd, an employee at an LA museum of television broadcasting. Like Eva, he's divorced, with a college-bound daughter (Eve Hewson), though compared with Eva's daughter, Albert's is an insecure, overbearing pill, spoiled half-rotten. Is Albert an indulgent father? How will he wear over time, Eva wonders? And what's up with Albert's ex?

The trailers give it away: The ex turns out to be a regular client and newfound friend of Eva's, a poet played by Catherine Keener. (I like this introductory dialogue of Holofcener's: "I'm a poet," Keener says, explaining what she does for a living. Not realizing she's being serious, Eva responds with a merry: "And I'm a dreamer.")

Here's the take-it-or-leave-it issue with "Enough Said." This plot device involving the Big Reveal, in which the poet's reportedly awful ex is now Eva's new squeeze, feels hoked-up in the extreme, leading to a protracted section of the film wherein Eva conceals a lot from both characters. It belongs to farce, not gentle, relationship-driven comedy. I wish Holofcener had found a way to deal with these characters without quite so much artificial machinery running their lives.

But this is where the actors come in. Louis-Dreyfus is an extraordinarily talented comic actress, with strong dramatic chops as well. Remarkably, it has been 16 years since she performed in a live-action feature film (Woody Allen's "Deconstructing Harry"). All that series television in the interim has honed her timing to a razor-sharp edge. What the performance lacks, I think, is a sense of surprise. Eva's not particularly richly delineated on the page; she's more a general-interest, audience-friendly, garden-variety protagonist, although any film with any female protagonist in the neighborhood of 50 is all too unusual to begin with.

Gandolfini doesn't force a moment, by contrast, dealing with Albert's peculiarities (he's very picky about his guacamole, for example) with a straightforward calm and a ready, apologetic smile. There's a lot in "Enough Said" about Albert being overweight, and some of the dialogue is, frankly, a little hard to hear in light of Gandolfini's fatal heart attack. At the same time, despite the movie's limitations, it's very satisfying to watch Louis-Dreyfus and Gandolfini enjoy each other's company on screen, as characters, because it's satisfying to watch them enjoy each other's company as performers.

Credits: Written and directed by ; produced by and . A release.

The comedy film "Enough Said" is a lighthearted love story about two people who fall in love with one another.

A divorced and single parent, Eva (Julia Louis Dreyfus) spends her days enjoying work as a masseuse but dreading her daughter's impending departure for college. She meets Albert (James Gandolfini) -- a sweet, funny and like-minded man also facing an empty nest. As their romance quickly blossoms, Eva befriends Marianne (Catherine Keener), her new massage client. Marianne is a beautiful poet who seems "almost perfect" except for one prominent quality: she rags on her ex-husband way too much. Suddenly, Eva finds herself doubting her own relationship with Albert as she learns the truth about Marianne's Ex. "Enough Said" is a sharp, insightful comedy that humorously explores the mess that often comes with getting involved again.