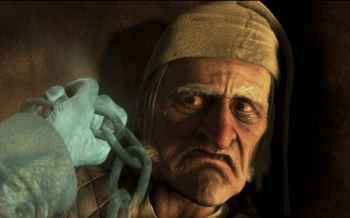 Robert Zemeckis has long been a filmmaker divided against himself, the techno-geek warring with the storyteller.

His newest work, "Disney's A Christmas Carol" (Charles Dickens -- demoted!), is an extravaganza of colliding intentions. But just when you give up on it, usually in the middle of its latest, extraneous, gyroscoping thrill-ride sequence, Zemeckis reminds you that he's capable of true visual dynamism, enhanced but not wholly dictated by the digital landscape he so clearly adores.

Plus, Jim Carrey is good as Scrooge. There's surprisingly little shtick in his performance. (He plays all the key ghosts as well, and Scrooge at various stages of his younger life.)

I'm all over the place regarding this all-over-the-place project, though I prefer it to Zemeckis' previous motion-capture animated features, "The Polar Express" (2004) and "Beowulf" (2007). Those really gave me the willies. Why did Anthony Hopkins have a digital beard in "Beowulf"? I still wake up screaming over that one. I can't spend all that time in the uncanny valley between doll-like inhumanity and approximations of humanity without starting to sweat.

With "A Christmas Carol," at least, Zemeckis has hold of a story that flies around and flits through time, so the whiz-bang aerial swoops over 1840s London aren't entirely jarring.

In many ways Zemeckis' adaptation stays true to its source.

The best scenes are the quietest: Early on, as we follow Scrooge through his petty, venal paces, Carrey (digitally outfitted with a chin and a nose of roughly equal length) plays the character's meanness and solitude for keeps. It's a thoughtful and honest performance, which is a strange thing to say about a film so hung up on visual fakery.

The actors do their thing, and then Zemeckis and his fellow lab technicians take over.

Gary Oldman provides the raw performance fodder for Bob Cratchit (who, as digitally manipulated, resembles Joe E. Brown) as well as Tiny Tim. Bob Hoskins turns up as Mr. Fezziwig, among others. Zemeckis has made strides since "The Polar Express" in terms of facial expressivity. And yet I remain cold to the motion-capture genre. Or rather, it remains cold to me. I always feel like the eyes aren't right, the foreheads are too Botoxed and the teeth were stolen from George Washington.

Here's what I wish Zemeckis would do: I wish he would explore a variation on motion-capture technology that takes us out of the uncanny valley and into more daring, less realistic imaginings. The most fluid individual passages in "A Christmas Carol" -- not the flashy stuff, but the simple, street-level moments -- reveal a director who knows how to keep his roving, restless camera eye on the right story details. Half the time he seems to be thinking ahead to the next step in the movie's commercial afterlife, i.e., the inevitable Disneyland and Disney World attractions. The other half of the time, he's doing what he's supposed to be doing as a cinematic storyteller. And even if you don't personally respond to the style, you admire the dogged craftsman behind it.

Charles Dickens' timeless tale of an old miser who must face Ghosts of Christmas Past, Present and Yet-to-Come as rein-visioned by Robert Zemeckis and staring Jim Carrey. Coming to theaters in Disney 3D and IMAX 3D

Credits: Directed by Robert Zemeckis; written by Zemeckis, based on the novella by Charles Dickens; produced by Steve Starkey, Zemeckis and Jack Rapke. A Walt Disney Pictures release.