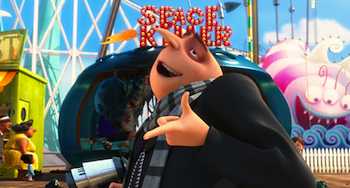 An agreeable jumble, the animated feature "Despicable Me" sells its 3-D in ways you wouldn't call sophisticated or witty. But you certainly notice it. Front car in a roller coaster, up, up, up, then down, down, down -- aaaaahhhhAAAAAAAHHHH!!!!!!!! Like that.

And now and then, I like it like that, no matter how dubious this second coming of 3-D is starting to smell. Compared with the restrained sophistication of Pixar's approach to the technology, and in sharp contrast to such murky, hacky live-action conversion jobs as "Clash of the Titans" and "The Last Airbender," here is a product -- turned out by a French animation house, written by the team behind "College Road Trip" and " Horton Hears a Who!" -- determined to give cheeseball 3-D blatancy a good name.

Is the movie itself good? Half-good, I'd say -- the second, more openly sentimental half. Ask any three people what "Despicable Me" is about, and no matter how many teasers or trailers they may have seen, they'll have a hard time bluffing. Mean fellow who's secretly nice? Little goggle-eyed pill-shaped thingies? Orphans? Supervillains vying for dominance? All of the above.

With a heavy Slavic dialect, Steve Carell voices the "Me" of the title, a sallow-complexioned baddie named Gru, whose mother (Julie Andrews, cast against spoonful-of-sugar vocal type) mistakes constant negativity for responsible parenting. Gru plans to steal the moon by way of a "shrink ray" and thereby assert his World's Greatest Antagonist status. The more derivative bits pit Gru against his nemesis, Vector (Jason Segel, nerding it up without the benefit of interesting material).

Then the script decides it's really about three adorable orphan girls, the eldest voiced by Miranda Cosgrove of "iCarly." They're adopted by Gru, and the villain's ancient assistant Dr. Nefario (voiced by Russell Brand) does not like being sidelined by the new kids on the block. Sunshine-colored comic relief is dispensed by Gru's minions, who figure prominently in the film's marketing campaign because they are cuter and more manic than the vaguely defined antihero at the story's center.

The directors are Chris Renaud and Pierre Coffin, who can't do much about the script's reliance on Gru's mangled way with outdated pop-cult phrases ("That's what I'm talkin' about!" "Chillax!"). They have, however, at least encouraged the animators to explore the macabre and approach this universe with some imagination. Gru's design and demeanor recall Charles Addams or Edward Gorey. (Another Addams connection: In the Broadway musical "The Addams Family," Uncle Fester yearns to capture the moon.) Around the film's midpoint, the script focuses more fruitfully on the humanization of Gru and his growing affection for the girls.

The results are on the moderately diverting level of "Cloudy With a Chance of Meatballs," which had the advantage of a super-clear concept and an irresistible title. "Despicable Me" may have a harder time of it in the marketplace. But by taking the "heart" part just seriously enough, and in the nick of time, the movie saves itself from itself.