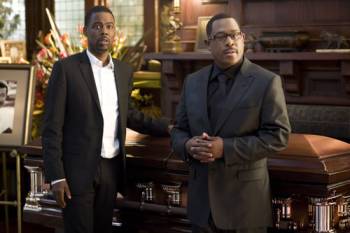 Ragged in its technique but pretty funny anyway, the remake of the 2007 British comedy "Death at a Funeral" gets by for many of the same reasons "Date Night" got by, all of them performance-related.

The original, scripted (like the faithful remake) by Dean Craig, was a solid mid-level farce, focusing on the inherent tension between a proper British funeral and oppositional forces ranging from hallucinogenic drugs to blackmailing lovers.

The story has been relocated to Pasadena, Calif. Instead of a pasty-white onscreen crew there's a largely African-American ensemble, whose strengths range from dry understatement (Columbus Short's inadvertent drug dealer and Ron Glass -- Ron Glass! From "Barney Miller"! -- as a starchy patriarch) to excrement-in-the-face mugging (Tracy Morgan, executing a grotesque but unfortunately amusing sight gag straight from the earlier film). Danny Glover is the cranky straight man in the other half of that particular gag.

The nominal leads belong to Chris Rock and Martin Lawrence, rivalrous brothers whose father has passed, and whose down-low life they know nothing about until a mystery man (Peter Dinklage, repeating his role in the 2007 edition) shows up with incriminating photos. Rock in particular is, well, a rock -- the amiable calm in the middle of medium-tempo chaos. One ringer among several is James Marsden, who throws himself gleefully into the role of boyfriend to Zoe Saldana's character. Marsden's acid-tripping becomes a movie unto itself.

This brings us to the matter of how to film an anything-goes script like "Death at a Funeral." In the original, director Frank Oz mitigated a lot of the obviousness by keeping the camera at a wry middle distance, and letting the most outrageous stuff -- the naked, tripping boyfriend unspooling an entire roll of toilet paper, fascinated, for example -- play out without galumphing visual emphasis.

By contrast, director Neil LaBute (a stern misanthrope by temperament as a playwright and screenwriter) struggles against his own behind-the-camera miscasting. Relying heavily on close-ups and a nervous editing rhythm, he is bailed out in scene after scene by his performers. At one point, Lawrence tackles Dinklage in an attempt to subdue the blackmailer. Why is the bit funny? Because it's done in one shot, and if you find yourself watching "Death at a Funeral" and wondering why certain other bits don't work as well, the number of distracting cuts within a given beat should provide a clue.

Like the British version, this one won't be for everyone: The swings between sentimentality and excrement are pretty wild. But seeing all these good, resourceful actors mix it up has its satisfactions.

Death at a Funeral Film Credits: Directed by Neil LaBute; written by Dean Craig, based on his own screenplay; produced by Sidney Kimmel, William Horberg, Chris Rock, Share Stallings and Laurence Malkin. A Screen Gems release.