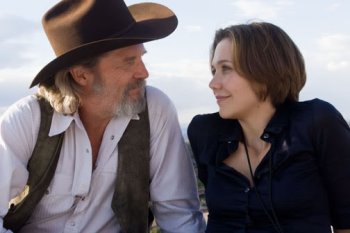 There's a powerful symmetry at work in "Crazy Heart."

It's a parallel between protagonist Bad Blake, a country singer at a nadir of disintegration, and star Jeff Bridges, whose exceptional film choices have put him at the height of his powers in time to make Blake the capstone of his career.

It's a mark of how fine a performance Bridges gives that it succeeds beautifully even though the besotted, bedeviled country singer has been an overly familiar popular-culture staple for forever.

As written and directed by first-time filmmaker Scott Cooper, Blake is a broke and falling apart country music legend, the veteran of four marriages, reduced to playing in bowling-alley bars and saying things like "It's good to be here; at my age it's good to be anywhere" and "I used to be somebody; now I'm somebody else."

On a par with Bridges' acting, and a sine qua non for "Crazy Heart's" success, is the excellent music he sings. There are great country songs, including Townes Van Zandt's "If I Needed You" and Waylon Jennings' "Are You Sure Hank Done It This Way" laced throughout the film, but the heart of Bad's act are the appealing melodies written for the picture by T-Bone Burnett and the late guitar player/songwriter Stephen Bruton. Hearing Bad's way with these enticing songs delineates his character as much as his words or his actions.

We meet Bad Blake at that bowling alley in Pueblo, Colo., where his reputation for carousing has preceded him. Everyone wants new songs from Bad, but that's the one thing he doesn't have. The situation is more promising in Santa Fe, N.M., where Bad is persuaded to meet journalist and single mother Jean Craddock (a capable Maggie Gyllenhaal) for a story. Jean may not be the world's best interviewer, but she is a fan, and a kind of wary rapport almost immediately grows between them, with Bad being especially taken by her 4-year-old son.

"Crazy Heart" also introduces us to the other people in Bad's life, including his hard-nosed manager (James Keane) and an old bar-owning friend (Duvall). Best of all, and in some ways as interesting a relationship as the film has, is the one between Bad and Tommy Sweet, one of his former backup men who is now the hugely successful king of slick, modern country.

Bad grouses a lot about Tommy being ungrateful. But once we meet the singer, played by Colin Farrell, he's not at all the way we picture him. Farrell, who sings a great duet with Bridges, is one of the film's surprise treats, proving, as he did in "In Bruges," that he is more relaxed and effective in offbeat alternate leads. "Crazy Heart" isn't only one of Bridges' most memorable roles, it's one of Farrell's as well.

Credits: Written and directed by Scott Cooper, based on the novel by Thomas Cobb; produced by Robert Duvall, Rob Carliner, Judy Cairo and T Bone Burnett. A Fox Searchlight release.