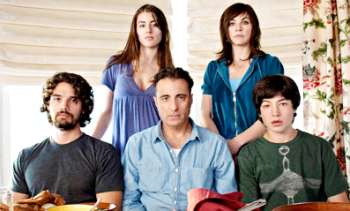 Raymond De Felitta's screwball farce "City Island" introduces us to the Rizzos, a boisterous party of four living in the tradition-steeped, seaside spit of Bronx real estate of the movie's title.

The Rizzos don't talk to one another much, and when they do the neighbors undoubtedly hear every word. But deep down, we're meant to understand, they shout because they care.

Corrections officer Vince (Andy Garcia) tells wife Joyce (Julianna Margulies) that he's out playing poker when he's really taking acting classes in Manhattan. Joyce smokes cigarettes on the sly and nurses a grudge about the extramarital affair she's sure Vince is having.

When Vince discovers that an inmate at his prison is his long-lost son, Tony (Steven Strait), he invites the soon-to-be ex-con to finish out his sentence by doing odd jobs around his house. This plot contrivance produces the expected howls of familial protest (and, really, the screamers do have a point) and topples the first domino for the rat-a-tat-tat revelation of all the hidden lies.

No, the movie's setup would barely pass muster on "Three's Company," and there's little doubt that the whole thing is going to end in a group hug. But "City Island" scrapes by and delivers a smile or two because it does contain a fundamental understanding of the rot that sets in when people hide their true selves from the ones they love.

De Felitta ("Two Family House") gives all his actors plenty of room to roam. Garcia, afforded the chance to stretch his comic muscles and play a working stiff, comes off best, nailing Vince's good-natured vulnerability. When Vince catches a break and lands an audition for a Martin Scorsese mob movie, Garcia delivers a nerve-jangling tour de force tryout that will be appreciated by out-of-work actors for years to come. And, yes, some shouting is involved.