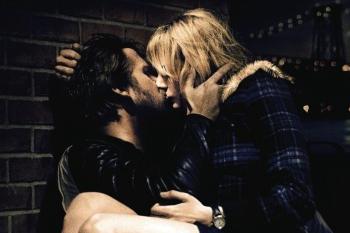 At its best, the drama captures little bits and pieces of a relationship, the telltale signs and clues to its undoing. In the end, it sympathizes more with the wronged, childlike husband than with the numbly exasperated wife.

At least, that's the way it's written; as performed, thankfully, it's more intriguing.

None of its limitations has to do with Michelle Williams, who brought such straight-shooting truth to everything from "Brokeback Mountain" to "Wendy and Lucy." Here she plays Cindy, a nurse who harbored dreams of becoming a doctor. She's married to Dean, a heavy-drinking sweetheart who makes a living painting houses. Dean's by far the showier role, played by Ryan Gosling, an actor of considerable emotional resources and a nagging show boater's instinct to dazzle his way through a partially or largely improvised scene. But it's Williams you never question, who makes every detail and close-up and impulse natural. She's spectacularly good.

The movie, directed and co-written by Derek Cianfrance, begins with a search for a lost dog. Cindy apparently is at fault for not locking the gate. It's Dean who reassures the couple's preteen daughter (Faith Wladyka) that their pet has "moved out to Hollywood to become a movie dog."

We sense the daughter has become, in effect, neutral territory in her parents' cold war. Early on in "Blue Valentine," just when many in the audience may begin wondering about how these people got here, we slide into our first flashback, to six years earlier in Brooklyn, (Cianfrance and his excellent cinematographer Andrij Parekh shot the present-day scenes on high-def digital video, contrasted with the flashbacks, shot on softer, warmer 16mm film.)

The director has characterized the film as a love story in the flashbacks and a tragedy in the present, and the way the two halves are spliced together intentionally answers some questions and leaves others dangling. In the present, Dean and Cindy leave their daughter for a night with Cindy's father (an emotionally abusive screamer, played well by John Doman) and head off for a night at a "theme" motel. There, in the eerily blue-soaked "Jetsons"-style room, they drink, despair, try to reignite what they once had. In the flashbacks, some of which are nicely observant and indirect and others heavily underlined, "Blue Valentine" gives us the story of how they met, how Cindy got pregnant, how amiable, directionless Dean always felt outclassed by the love of his life.

The movie caused a fuss late last year when it caught an NC-17 rating for sexual content, in particular for one brief scene of implied oral sex. "Blue Valentine" was later re-rated sensibly down to an R. The movie also has gained some notoriety for the intense rehearsal period the actors underwent, and for Gosling (at one point, during a scene shot on the Brooklyn Bridge) apparently taking some major-league chances at a great height, working without a net.

During Cindy and Dean's first date, Williams and Gosling perform an impromptu duet (she tap-dances, he plays the ukulele and sings) to "You Always Hurt the One You Love." In this scene, everything good and less good about "Blue Valentine" comes together. It's charming. Yet Dean's strangulated falsetto (he has to "sing goofy," he says, if he's going to sing at all) feels like an audition piece. Did they have to pick a song freighted with quite so much ironically heavy-handed meaning? And yet: Watch the way Williams watches Gosling, and the way she makes you believe she's falling, hard, for someone sneaking up on her affections.

"Blue Valentine" will strike some people as no less directionless than Dean, though it struck me as most affecting precisely when it chooses to hang out, in a fly-on-the-wall way, with these ordinary people. The best of it plays like an acting exercise that serves the intimate, often bruising relationship at the core. Gosling seems to be pulling from an impressive bag of performance tricks, Williams from a deeper well, drawn from life.