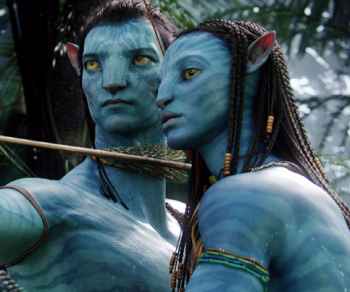 Blue is the new green, if the billion-or-more box-office predictions come true for James Cameron's first feature since "Titanic" 12 years ago.

So. How is it? Does it look like a billion?

But folks, I haven't experienced such a clear dividing line within a blockbuster in years.

The first 90 minutes of "Avatar" are pretty terrific -- a full-immersion technological wonder with wonders to spare. The other 72 minutes, less and less terrific. Cameron's story, which has been kicking around in his head for decades, becomes intentionally grueling in its heavily telegraphed narrative turn toward genocidal anguish, grim echoes of Vietnam-style firefights and the inevitable payback time and sequel setup.

If your exhilaration with the (approximate) first half is undercut by an increasingly deflating pffffftttt sound, Cameron nonetheless has delivered the screen's most anticipated and persuasive blend of live-action and motion-capture animation to date. The movie really does look like fantastic, whether it's dealing with flying prehistoric-yet-futuristic birds or fluorescent mushrooms or imagery perilously close to what Cameron himself refers to (in the Cameron biography "The Futurist") as "fantasy van art." Compare the 10-foot-tall alien race in "Avatar" to Robert Zemeckis' motion-captured (more like emotion-erased) humans in "A Christmas Carol." You tell me who looks alien. (Cameron has said he went ahead with "Avatar" in earnest once he saw Gollum realized so vividly in Peter Jackson's "Lord of the Rings" trilogy.)

"Avatar" takes place in 2154 on the planet Pandora, in "a time of great sorrow." Earth, ecologically, is kaput. A mineral known as "unobtainium" lies beneath the sacred lands of the planet's native people, the highly developed Na'vi, who have a very uneasy relationship with the occupying forces. American corporate interests are intent on relocating the thin blue "savages" one way or another. Though the Na'vi adversaries aren't meant to be U.S. military personnel (they're grunts in the Blackwater-style employ of the multinational company at the helm of the mining operation), "Avatar" unmistakably pits the peace-loving blue-thins, who are fleet of foot and deft with bow and arrow, against the callous cruelty of Americans in uniform. Much of the battlefield imagery recalls the firefights and wrenching civilian casualties of Vietnam; the hero's trajectory, meanwhile, hews closely to Western revisionism, both solid ("A Man Called Horse") and squishy ("Dances With Wolves").

Our hero is paraplegic ex-Marine Jake Sully (Australian actor Sam Worthington), who takes over his late brother's job as part of the Avatar Program on Pandora. This means he psychically controls the movements of his Na'vi-like avatar while confined to a coffin-like container. The program, originally designed for botany research, is overseen by the tough-as-Ripley-in-"Aliens" boss played by Sigourney Weaver. By "Matrix"-ing his way into an alter ego, Jake regains metaphoric control of his legs, and his life. He is a changed man once he tastes Na'vi life and love with the lissome cobalt warrior ingenue Neytiri (Zoe Saldana).

Too late, Jake realizes the weaselly corporate drone played by Giovanni Ribisi and mean ol' Col. Quaritch (Stephen Lang), leader of the mercenaries, have no interest in anything but carnage and profits. How big a force in Hollywood is Cameron? Big enough so that if anyone did try to talk him out of laying on the Iraq war parallels (references to "shock and awe," and fighting "terror with terror"), he didn't listen. The slaughter of the Na'vi and the subsequent rabble-rousing pushback dominates the second, ham-fisted half of "Avatar," making this one of the most violent peacenik fables since "The Trial of Billy Jack." It does go on. At one point, Lang's bullet-spitting antagonist says, "I want this mission high and tight. I wanted to be home for dinner." And you think, well, maybe a late dinner.

So it's naive. So it's simplistic. So was Cameron's "The Abyss," which tried to push visual effects to a new realm and didn't quite succeed. This one does. (By all means, see it in 3-D.) Cameron's a filmmaker to drive you nuts: "Titanic" may have been the worst-written film I ever willingly paid to see twice, but he's not a lunkhead. Or rather, he's an intuitive lunkhead, with real cinema in his blood. "Avatar," perhaps too much in synch with Cameron's previous walloper, gets waterlogged in the later going as well. But I'll probably see it a second time, because 90 minutes of wow is 90 minutes of wow.

About the Movie "Avatar"

The movie "Avatar" takes us to a spectacular world beyond imagination, where a reluctant hero embarks on an epic adventure, ultimately fighting to save the alien world he has learned to call home. James Cameron, the Oscar-winning director of Titanic, first conceived the film 15 years ago, when the means to realize his vision did not exist yet. After four years of production, AVATAR, a live action film with a new generation of special effects, delivers a fully immersive cinematic experience of a new kind, where the revolutionary technology invented to make the film disappears into the emotion of the characters and the sweep of the story.