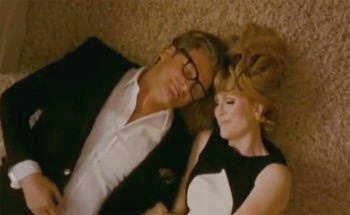 Some films aren't revelations, exactly, but they burrow so deeply into old truths about love and loss and the mess and thrill of life, they seem new anyway.

"A Single Man" is one such film, one of the best of 2009. It's subtly heartbreaking.

In adapting Christopher Isherwood's 1964 novel to the screen, first-time feature filmmaker Tom Ford has put his admiration of the source material, a groundbreaking text in the pre-Stonewall era, to excellent results.

Ford also has facilitated a career best for Colin Firth, one of the screen's great and subtle portraitists.

Firth is nearly always exemplary in his efforts; here, though, he opens up to new areas of artistry as well as subtlety. Early in "A Single Man," protagonist George Falconer learns of his longtime lover's death in a car accident. George receives the news by telephone. (The story takes place in Santa Monica, Calif., in 1962.) The camera stays on him a long time, as he soldiers through the niceties, holding back his emotions as best he can while thanking his caller for the information. It is a stunning piece of acting and in this one shot, Ford -- a legendary fashion designer for and Yves Saint Laurent -- proves himself an instinctual colleague.

We see bits of George's life with the much-younger Jim (Matthew Goode) in shrewdly interpolated flashbacks. The film keeps returning to George's present predicament. Grieving, he considers suicide. All aspects of this Englishman's expat life in Southern California seem out of kilter. His best friend and one-time lover, played by Julianne Moore, rescues George from his solipsism for a night. Their alcohol-fueled therapy session brings up a host of questions. Has this woman pined for her bisexual but now fully gay comrade a little too long? Meantime, one of George's students, (Nicholas Hoult of "About a Boy") presents himself as a diversionary prospect. (This part feels like fantasy, but so be it.)

Much of the film, which is meticulously art-directed but not fussily so, takes place in George's canyon-side home, the sort of L.A. domicile that offers seclusion and a sense of elegant limbo. George talks about his mastery of the invisible gay man's life in 1960s America. Gazing at himself getting ready to teach one more day, he sees "not a face in the mirror but the expression of a predicament." Charley, George's female confidant, is like Sally Bowles all grown up and relocated to Southern California. (Bowles was introduced by Isherwood's own "Berlin Stories," long before she became the centerpiece of "Cabaret.") Firth and Moore are wonderful together, and just about every sequence and flourish and detail in Ford's film feels and looks right. It is primarily Firth's triumph. But it is not a solitary one.

About the Movie "A Single Man" Movie Trailer

An English professor, one year after the sudden death of his boyfriend, is unable to cope with his typical days in 1960s Los Angeles.

MPAA rating: R (for some disturbing images and nudity/sexual content).

Credits: Directed by Tom Ford; written by Ford and David Scearce, based on the novel by Christopher Isherwood; produced by Ford, Chris Weitz, Andrew Miano and Robert Salerno. A release.