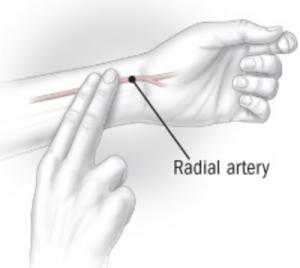 Many techniques, including blood tests and risk scoring systems, have been developed to predict a woman's risk of having a heart attack.

Now it appears that simply checking your pulse first thing in the morning may be sufficient.

According to a study, resting heart rate — the number of heartbeats per minute while at rest — predicts risk for cardiac events in middle-aged women regardless of physical activity, smoking, and other risk factors. The results, which confirm previous findings in men, are based on data from the Women's Health Initiative (WHI).

WHI investigators, including Harvard Women's Health Watch advisory board member Dr. JoAnn E. Manson, examined the relationship between resting heart rate and heart attacks and strokes in 129,135 postmenopausal women participating in the WHI. Subjects had no apparent history of cardiovascular problems at the start of the study, and none were taking medications that affect resting heart rate.

The best time to measure your resting heart rate is before you get out of bed in the morning.

To measure it at the wrist, lightly press the index and middle fingers together on the opposite wrist, below the fat pad of the thumb.

Count the number of beats in 15 seconds, and multiply by four.

The resting heart rate of subjects was measured by taking their pulse at the wrist after they had sat quietly for five minutes. Physical activity, depression and anxiety, alcohol and caffeine use, hypertension, smoking, diabetes, and other factors were assessed by questionnaires and rating scales.

This correlation held regardless of race or ethnicity and was independent of diabetes, hypertension, and unfavorable cholesterol levels. Resting heart rate was not related to the risk of stroke.

According to the authors, although a resting heart rate above 76 may not be as powerful a predictor of heart problems as factors such as smoking, diabetes, or cholesterol levels, it's still a useful indicator — a tip-off that lifestyle changes such as increased physical activity and stress reduction may be in order.

Both regular exercise and relaxation techniques such as meditation and tai chi can help lower activity in the autonomic nervous system, which controls heart rate.

More research is needed to find out if lowering resting heart rate through such activities translates into a reduced risk for having a heart attack.