Why There's No Outcry Over Economic Inequality 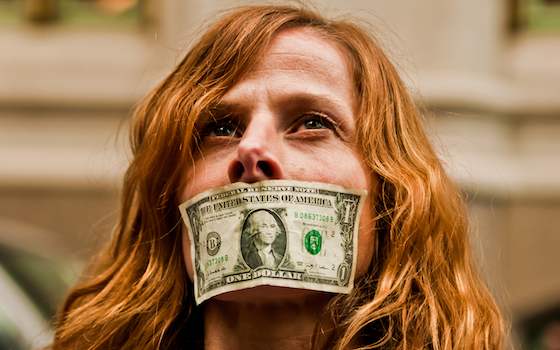 Why There's No Outcry Over Economic Inequality (Photo: Shehan Peruma)

People ask me all the time why we don't have a revolution in America, or at least a major wave of reform similar to that of the Progressive Era or the New Deal or the Great Society.

Middle incomes are sinking, the ranks of the poor are swelling, almost all the economic gains are going to the top, and big money is corrupting our democracy. So why isn't there more of a ruckus?

The answer is complex, but three reasons stand out.

First, the working class is paralyzed with fear it will lose the jobs and wages it already has.

In earlier decades, the working class fomented reform. The labor movement led the charge for a minimum wage, 40-hour workweek, unemployment insurance and .

No longer. Working people don't dare. The share of working-age Americans holding jobs is now lower than at any time in the last three decades, and 76 percent of them are living paycheck to paycheck.

No one has any job security. The last thing they want to do is make a fuss and risk losing the little they have. Besides, their major means of organizing and protecting themselves -- labor unions -- have been decimated. Four decades ago more than a third of private-sector workers were unionized. Now, fewer than 7 percent belong to a union.

In prior decades students were a major force for social change. They played an active role in the Civil Rights movement, the Free Speech movement and against the Vietnam War. But today's students don't want to make a ruckus. They're laden with debt. Since 1999, student debt has increased more than 500 percent, yet the average starting salary for graduates has dropped 10 percent, adjusted for inflation. Student debts can't be canceled in bankruptcy. A default brings penalties and ruins a credit rating.

To make matters worse, the job market for new graduates remains lousy. Which is why record numbers are still living at home. Reformers and revolutionaries don't look forward to living with mom and dad or worrying about credit ratings and job recommendations.

Third and finally, the American public has become so cynical about government that many no longer think reform is possible.

When asked if they believe government will do the right thing most of the time, fewer than 20 percent of Americans agree. Fifty years ago, when that question was first asked on standard surveys, more than 75 percent agreed.

It's hard to get people worked up to change society or even to change a few laws when they don't believe government can possibly work.

Was all this the result of a giant conspiracy among right-wing Republicans, corporate executives and Wall Street moguls to cut jobs and wages in order to cow average workers, bury students under so much debt they'd never take to the streets, and make most Americans so cynical about government they wouldn't even try for change?

It's more likely they and others simply allowed all this to unfold, like a giant wet blanket over the outrage and indignation most Americans feel but don't express.

Change is coming anyway. We cannot abide an ever-greater share of the nation's income and wealth going to the top while median household incomes continue to drop, one out of five of our children living in dire poverty, and big money taking over our democracy.

At some point, working people, students and the broad public will have had enough. They will reclaim our economy and our democracy. This has been the central lesson of American history.

Reform is less risky than revolution, but the longer we wait, the more likely it will be the latter.

Economy: "Why There's No Outcry Over Economic Inequality"