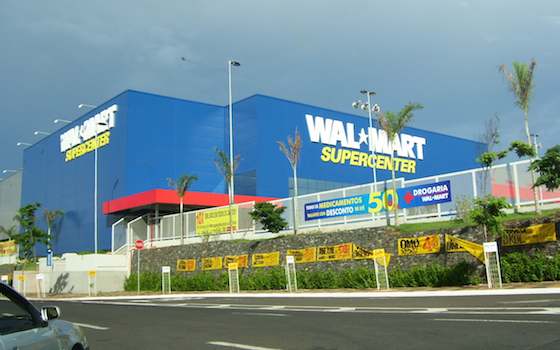 I spent several days in last week with students from around the country who were preparing to head into the heartland to help organize workers for better jobs and wages. (Full familial disclosure: My son Adam is one of the leaders.)

Almost exactly 50 years ago, a similar group headed to to register African-Americans to vote, in what came to be known as Freedom Summer.

The current struggle of low-wage workers across America echoes the civil rights struggle of the 1960s.

Today, as then, a group of Americans is denied the dignity of decent wages and working conditions. Today, just as then, powerful forces are threatening and intimidating vulnerable people for exercising their legal rights. Today, just like 50 years ago, people who have been treated as voiceless and disposable are standing up and demanding change.

Although is no Bull Connor, it's the poster child for keeping low-wage workers down. America's largest employer, with about 1.4 million workers, refuses to provide most of them with an income they can live on. The vast majority earns under a year, with an average hourly wage of about .

You and I and other taxpayers shell out for these workers' and food stamps because they and their families can't stay afloat on what pays. (I've often thought and other big employers should have to pay a tax equal to the public assistance their workers receive because the companies don't pay them enough to stay out of poverty.)

won't even allow workers to organize for better jobs and wages. In January, the National Labor Relations Board issued a complaint accusing it of unlawfully threatening or retaliating against workers who have taken part in strikes and protests.

The firm says it can't afford to give its workers a raise or better hours and working conditions. Baloney. is America's biggest retailer. Its policies are pulling every other major retailer into the same race to the bottom. If halted the race, the race would stop.

This week, employees will go on strike in dozens of cities. A group of "Walmart Moms" is also marching for better hours and better treatment of pregnant employees. And an employee group has sent a letter and voting guide to shareholders asking that they vote against re-election as chair.

isn't the only place where low-wage workers are on the move. Two weeks ago, 2,000 protesters gathered at corporate headquarters in suburban to demand a hike in the minimum wage and the right to form a union without retaliation. More than 100 were arrested.

Giant fast-food companies have the largest gap between the pay of CEOs and workers of any industry, with a CEO-to-worker compensation ratio of more than 1,000-to-one.

Meanwhile, across America, low-wage workers are demanding -- and in many cases getting -- increases in the minimum wage. Despite gridlock, seven states have raised their own minimums so far this year. A number of cities have also voted in minimum-wage increases. On Monday, city council approved a minimum wage hike to an hour, the highest in the nation, to take effect over the next few years.

The movement of low-wage workers for decent pay and working conditions is partly a reflection of America's emerging low-wage economy. While low-wage industries such as retail and restaurant accounted for 22 percent of the jobs lost in the Great Recession, they've generated 44 percent of the jobs added since then, according to a recent report from the .

But the movement is also a moral struggle for decency and respect, and full participation in our economy and society. In these ways, it's the civil rights struggle of our time.

But confronting such powerful bastions is a vital step toward fundamental social change. Freedom Summer II is just the start.