The Cost of a Beer: Then and Now 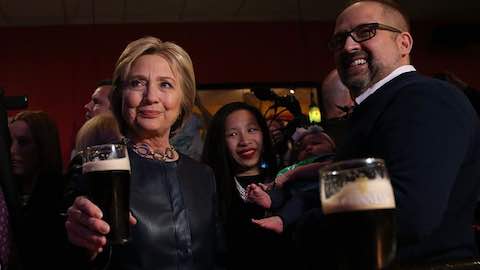 The Cost of a Beer: Then and Now

Using data from the Bureau of Labor Statistics and PintPrice.com, MooseRoots found the average cost of a pint of beer dating back to 1952.

Cracking open a cold one has always been a common symbol of friendship and relaxation. Some believe beer has certain health benefits, and it is the favorite alcoholic drink of our current president. In many ways it is a staple of American diet and culture.

Originally created in ancient Mesopotamia, beer has since matured from unrefined jugs of fermented barley to a popular commercial product with thousands of different brands. Now, it is consumed daily by people all over the world.

MooseRoots, a genealogy research site powered by Graphiq, set out to discover how the price of beer has changed over time. Using data aggregate from the Bureau of Labor Statistics and PintPrice.com, MooseRoots found the average cost of a pint dating back to 1952. The team calculated the historical price of a pint of beer, as well as the inflation-adjusted price to find out just how much people were paying for their brews back then.

As illustrated in the above visualization, although the historical cost of a pint increases over time, the real, inflation-adjusted price has decreased.

Now, the cost of a pint of beer is $3.99. So, for those still preoccupied with 1985, rejoice because the value of a beer is exactly the same as it was back then.

Check out the complete list of historical and inflation-adjusted beer prices from 1952-2016.

Economy: "The Cost of a Beer: Then and Now"