The States With The Most People In Debt 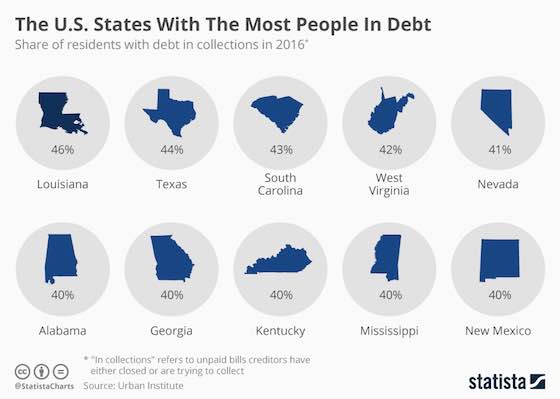 The States With The Most People In Debt

This chart shows the share of residents by state with debt in collections.

Using data from anonymous consumer-level records from a major credit bureau, the Urban Institute was able to release figures on debt levels across the United States.

Nationwide, 33 percent of people have debt that has gone into collections which means they have unpaid bills creditors have either closed or are trying to collect. Between states, the share of people in debt fluctuates considerably and the lowest levels were recorded in Minnesota (17 percent), South Dakota (18 percent) and North Dakota (19 percent).

Louisiana is at the opposite end of the scale with nearly half its residents in debt with collections.

Last year, 46 percent of people living in Louisiana were in debt and the median amount owed was $1,486. The majority of U.S. states with high levels of debt are concentrated in the south. Texas is second with 44 percent of its residents in debt and South Carolina comes third with 43 percent.

Economy: "The States With The Most People In Debt"