How Falling Oil Prices Have Changed the Economy 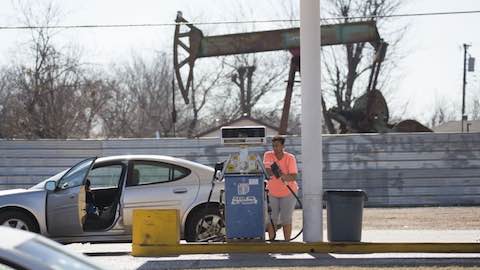 How Falling Oil Prices Have Changed the Economy

We break down how the oil downturn rocked the nation and world in 11 charts, from gas prices to truck sales, airlines to inflation. Also: how it all started.

To the average person, the price of oil is an economic novelty -- a single number among a series of stock quotes and financial indicators. But oil's influence is vast. Americans consume nearly 20 million barrels of oil per day. Energy companies dominate sales volume rankings. Small fluctuations in barrel prices can shake entire economies, spur corporate investment and alter consumer spending habits, all in a matter of months.

At the start of 2016, oil hit its lowest price since 2001, having fallen from $110 (July 2014) to $30 (January 2016). Although oil prices have rebounded slightly since then, the industry remains sluggish. FindTheCompany, a corporate research site that's part of Graphiq, set out to track how falling oil prices have shaken the economy over the last two years, from gas prices to travel, personal investing to unemployment.

Without further ado, here are 11 charts that show the impact of oil prices on the economy. To begin, let's see how oil prices started falling the first place.

#1. How it All Started: An Increase in Domestic Oil Production

How did oil prices fall so dramatically? Start with American oil production. When the Bush Administration signed the Energy Policy Act of 2005, fracking -- a controversial method of recovering oil and gas from shale rock -- became exempt from the Safe Drinking Water Act. Fracking exploded, creating millions of jobs and millions more new barrels of oil.

Now America, the most oil-hungry country in the world, had found a way to satisfy much of its own demand. Faced with a decrease in sales to the United States, oil-producing countries like Saudi Arabia, Russia and Iran were forced to lower prices. From there, the dominos began to fall.

Rather than slow production, oil-producing countries continued to drill and frack for oil aggressively, making up for lower prices with increasing volume. Naturally, this only drove the price of oil even lower.

#3. Gas Prices Have Come Down as a Result

As oil prices drop, so too does the price at the pump. Americans are paying about $2.50 per gallon today, down from nearly $4 in 2014.

#4. But GDP Growth Has Stalled

Historically, falling oil prices have been a boon for the U.S. economy, as consumers enjoy more gas savings and American companies pay less for fuel and energy. Several economists predicted accelerating GDP growth as a result. Instead, GDP growth has stalled. So what's going on?

#5. Big Oil's Fall Could be Dragging Down the U.S. Economy

Some economists suspect Big Oil's troubles are cancelling out the gains of low oil prices. Through late 2015, oil companies had laid off more than 200,000 workers around the globe. Meanwhile, giant companies like Exxon Mobil have reduced capital expenditures by 20 percent, spending less on trucks, drills, pipes and other infrastructure -- investments that typically spur economic growth across multiple sectors.

When three of America's 10 biggest companies are oil producers, it drags down the whole economy.

#6. The Market Has Been in Havoc Ever Since

Big Oil's decline has rocked the market, making Wall Street a crapshoot over the last 18 months. The market's steady gains since 2012 have been interrupted by a roller coaster of rapid gains and losses, likely due to the energy sector's sluggishness.

#7. And There's a Clear Culprit

You can see just how poorly the energy sector has performed relative to the S&P 500 (which reflects a general picture of all sectors). Even if the market as a whole has returned modest gains over the last two years, oil companies have seen 40 percent declines -- a truly catastrophic stock price decrease.

Still, one industry's loss is another's gain. Airlines are enjoying their lowest fuel prices in years, and seeing record profits as a result.

#10. Job Growth Has Continued, No Thanks to Oil

Oil layoffs have partially offset employment gains in growing sectors, like retail, health, hospitality and education. While the U.S. continues to add jobs, growth has slowed over the last 12 months.

Since the 2008 economic crisis, the Federal Reserve has kept interest rates low to encourage borrowing and spur the economy. In late 2015, the Fed finally began increasing rates for the first time in years, a sign that the economy is healthy again.

Once again, however, oil is proving a problem. Dropping oil prices tend to result in lower inflation rates, given that oil is involved in so many parts of the economy, from transportation to heating. But interest rate increases can also lower inflation, as people save more and spend less.

With inflation rates still lingering below 2 percent, the Fed remains nervous. While the government believes inflation will continue to rise with the growing economy, the depressed energy sector could keep doing just the opposite, bringing inflation rates even lower. A small amount of inflation (typically, 2 to 3 percent) is good for the economy. Meanwhile, very low inflation -- or outright deflation -- can cause a vicious cycle of cash hoarding, decreased production, layoffs, increased consumer borrowing and, ultimately, the crumbling of core financial institutions as they are forced to write off bad loans. If that happens, part of our thanks belongs to the humble barrel of oil.

Economy: "How Falling Oil Prices Have Changed the Economy"