World's Most And Least Competitive Countries 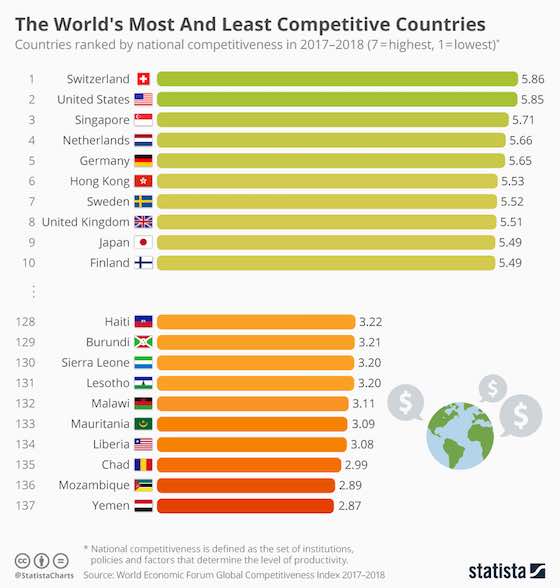 World's Most And Least Competitive Countries

What are the most and least competitive countries in the World? This chart shows countries by ranked by competitiveness.

A recently released World Economic Forum report has found that the global economy is recovering well nearly a decade on from the start of the global financial crisis with GDP growth hitting 3.5 percent in 2017. The eurozone in particular is regaining traction with 1.9 percent growth expected this year. The improvement in Europe's economic fortunes can be seen in the report and the following infographic which shows that six European economies are among the world's ten most competitive.

The World Economic Forum defines national competitiveness as the set of institutions, policies and factors determining productivity levels. Switzerland grabbed top spot in the report with an index score of 5.86 out of 7, recording strong and balanced results across the most important determining factors such as health, primary education and a reliable macroeconomic environment. The United States comes second for national competitiveness, though the report notes that it needs to improve its macroeconomic environment as well as health and education, both of which scored poorly.

Eight of the world's ten worst countries for national competitiveness were in Africa. Yemen has been devasted by war in recent years and it comes bottom with a score of 2.87. It was followed by Mozambique and Chad, both of which had a score of less than three. The only other non-African country in the bottom ten was Haiti which scored 3.22.