Canvassing for 'None of the Above' 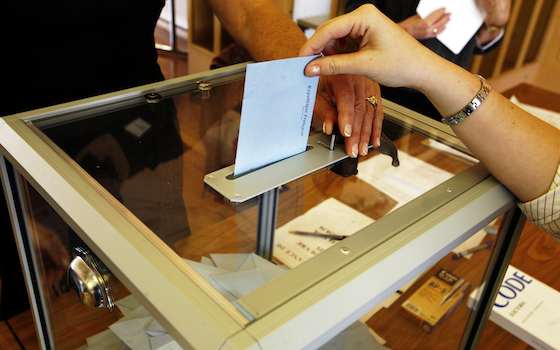 Canvassing for 'None of the Above'

Almost everywhere in the democratic world fewer people today are voting in national elections than in previous generations. In Britain, turnout at elections has fallen by a quarter since the immediate post-war period, and in countries such as France, Germany and Japan by roughly the same amount. Turnout in the United States, always low by international standards, has remained low. Politicians in democracies must often feel like actors on stage watching gloomily as members of the audience depart the theatre while the performance is going on.

Some of the reasons for the widespread decline in turnout are healthy. In Europe, the Antipodes and most of the Western Hemisphere, politics has become less tribal. In those parts of the world, voters feel less need than in the past to bear witness to their tribal allegiance by turning out to vote for their party. In Northern Ireland until recently, it was always a sign of pathology -- never of health -- that turnout there was consistently higher than elsewhere in the UK.

Politics in most of the democratic world also arouses less ideological passion than it once did. Elections no longer pit communists and socialists against capitalist lackeys, authoritarian collectivists against freemarket liberals. The Free Democrats in Germany have lost out, not because they have lost battles but because they have effectively won the war. Welfare-state capitalism is now the ideological hegemon almost everywhere except in the US. Even there, the struggles to abolish social security.

But some causes of potential voters' declining disposition to vote are less healthy. Political parties' behaviour in office has become less and less predictable. How many Labour voters in Britain in 2001 expected Tony Blair's government to join the US in invading Iraq two years later? Millions of French men and women who voted for Francois Hollande last year must feel cheated as his administration increasingly adopts, however unwillingly, Angloinspired economic nostrums.

Even more pathological in its implications is more and more voters' sense that, while they suffer or feel squeezed, politicians of all parties are busy doing their own thing, sometimes feathering their own nests, more often playing their own selfserving games -- what a percipient Frenchman once called la politique politicienne. Politicians are no longer middle class or working class. Rather, they are political class. They form, or appear to form, a tight in-group from which millions of citizens feel excluded.

What is the poor citizen to do? There are two broad options. One is for individuals to turn out to vote but to vote for self-proclaimed anti-politician political parties. That is exactly what hundreds of thousands of alienated citizens are doing across the globe, voting for candidates in the US, UKIP candidates in Britain, Beppe Grillo and his fellow comedians in Italy, the ugly Golden Dawn in Greece and assorted mavericks elsewhere.

But there is another option, occasionally talked about but seldom delivered. Why not give voters everywhere the 'None of the above' option? This is exactly what the has decreed should be offered as an option on the ballot paper for the world's largest electorate in the next general election, to be held by May.

This option seems a no-brainer. It would make voters less likely to vote for nasty parties such Golden Dawn or for wild and woolly outfits such as Grillo's . It would also give millions of citizens a chance to demonstrate that, far from being apathetic, they are actually very angry with the performance of their country's political class. Of course, practical issues would arise. The main one is what to do if that non-existent candidate 'None of the above' actually wins, in the sense of receiving more votes than any of the real candidates. In India, that would not invalidate the election, with the winner being the human candidate who gets the most votes. That is also the procedure adopted in one of the few jurisdictions with substantial experience of 'None of the above': the US state of Nevada (eccentric in this respect as in so many others).

But perhaps some innovative nation or state should allow voters to tick a box marked 'None of the above' -- or, as in Nevada, 'None of these candidates' -- but then to indicate who they would have voted for if they had voted for anybody. Those second-preference votes could then be counted either as full votes for the various candidates or as, say, half or quarter votes -- definitely unenthusiastic votes but contributing to deciding the election outcome all the same.

In that way, the two discrepant needs of letting off steam and filling important offices could be met at the same time. Anyone willing to give that option a try? Millions of voters worldwide would be grateful.

"Canvassing for 'None of the Above'"