Why the West Struggles to Understand the BRICS 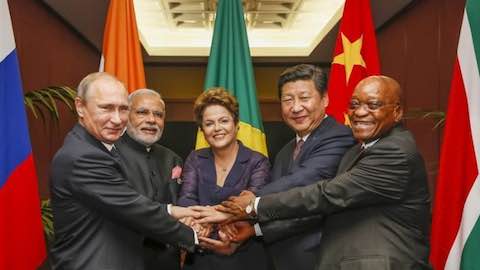 Why the West Struggles to Understand the BRICS

The transformation of the BRICS acronym from an investment term into a household name is one of the defining developments of the 21st century so far.

The transformation of the BRICs acronym from an investment term into a household name of international politics and, more recently, into a semi-institutionalized political outfit (called BRICS, with a capital 'S' after South Africa's inclusion), is one of the defining developments in international politics of the first decade of the 21st century. The BRICS' move towards institutionalization, which began in earnest in 2009, has received very little attention from the international relations community.

Over the past years, the majority of observers in Europe and the United States have argued that category was inadequate for a more rigorous analysis given that the differences between the BRICS far outweighed their commonalities. For example, it is frequently pointed out that in economic terms, Russia and Brazil are large commodity exporters, whereas China is a big commodity importer. China is a proponent of the Doha trade round, India a skeptic. From a political perspective, Brazil, India and South Africa's vibrant democracies certainly contrast China's and Russia's authoritarian governments. Brazil is non-nuclear, while the other three possess nuclear weapons, and India is a non-signatory of the Non-Proliferation Treaty (NPT).

Similarly, from early on, most analysts argued that the BRICS are not a coherent group since their positions in global political order differ strongly. More importantly still, an unresolved border conflict between China and India as well as overlapping spheres of interest in the Indian Ocean are often cited as proof that the BRICS are an impossible alliance.

In sum, for most observers the BRICS were too disparate to be a significant category -- in the international media, the BRICS have therefore been routinely described as "a disparate quartet", a "motley crew" or as an "odd grouping". The idea of the BRICS as a bloc, according to this narrative, was deeply flawed and the BRICS member countries were too diverse to ever form a coherent group.

This narrative gained strength in 2012, when emerging markets around the world began to suffer low commodity prices, hurting growth in Russia and Brazil in particular. But even China entered a phase of lower growth. Many believed the idea had lost its usefulness -- now that members were in trouble, was there a point in them jointly discussing the future global order?

Yet, while many criticize the grouping for its supposed incoherence, an important detail was often overlooked: Contradicting all expectations of the imminent dissolution of the group, the member countries worked towards strengthening cooperation. The BRICS not only continued to exist but also started a process of institutionalization, leading to regular ministerial meetings in areas such as education, public health and national security, frequent encounters between presidents and foreign ministers and -- perhaps most importantly -- the creation of the BRICS-led New Development Bank (NDB), headquartered in Shanghai, and the contingent reserve agreement, a financial safety net for times of financial crisis. The BRICS summit is now a major pillar of the yearly travel schedule of the nations' presidents, irrespective of ideology. During the recent meeting in Goa, leaders decided to move ahead with the creation of a BRICS-led rating agency, based on the notion that the existing institutions -- Moody's, Standard and Poor's and Fitch -- unfairly favor Western countries and companies.

Some had feared that the profound political shift in Brazil -- from the centre-left Workers' Party to the centre-right administration of Michel Temer, following the impeachment Dilma Rousseff in August 2016 -- would reduce the country's commitment to the BRICS coalition. But Temer has spoken of the grouping in favorable terms, and travelled to Asia twice in the first months of his mandate.

There are four key aspects to keep in mind when considering the future of the BRICS coalition.

First, while lower growth in China currently dominates headlines, it is mistake to believe that the global shift to emerging powers was temporary. Observers should remember that, for developing countries, the wave of industrialization and urbanization and the associated productivity gains are far from over. With their faster-growing populations and productivity, they will inevitably enjoy a growth advantage over developed economies for some time to come. China may take longer to overtake the US economy, but few would seriously argue that we are not witnessing a transition. The world economy will not return to the distribution of power of the late 20th century. As Jim O’Neill recently pointed out:

The suggestion that the BRICS' importance was overstated is simply naïve. The size of the original four BRICs economies, taken together, is roughly consistent with the projections I made all those years ago.

Second, for policy makers in Bras'lia, Pretoria and Beijing, it is clear that the BRICS grouping is producing significant benefits for its members by creating an important platform for debate. In areas such as urban planning, academia, anti-terrorism measures, water management, coordination of policy positions and higher education, the countries face common challenges -- but previously had few channels of communication with each other. Considering how limited relations between countries like Brazil and India have been historically, the significance of such coordinated action should not be overlooked.

Third, the intra-group differences and disagreements mentioned above are real, and the BRICS grouping will never resemble the EU or NATO. At the same time, it would be naïve to think that they preclude meaningful cooperation. In addition to the divergences listed, critics often point out that Russia’s GDP per capita stands at US$ 20,000 compared to India’s US$3000. Yet nobody cared much about GDP per capita when NATO, which includes Norway (with a GDP per capita of around US$100,000) accepted Albania, which has a GDP per capita of less than US$ 4000. Similar discrepancies exist in the European Union, Mercosur, ASEAN, the AU, the UN, the G20 or almost every international grouping one can think of. There is a long history of successful cooperation between countries that are very different from each other – just think of Turkey’s NATO membership, the profound economic embrace between the United States and China, or US military alliances with countries such as Saudi Arabia or Pakistan.

In the same way, frequent disagreement does not keep countries from cooperating or being part of the same clubs. Germany and Italy are fiercely opposed when it comes to UN Security Council reform, and Germany and France sharply disagreed over military intervention in Libya. The United Kingdom and France, for their part, held opposing views on such important matters as the military intervention in Iraq. And yet, not a single analyst argued that these disagreements showed that NATO or the EU were bad ideas.

Fourth, Western international leadership is so deeply rooted and ubiquitous that people think of it as somehow natural, limiting observers' capacity to objectively assess the consequences of its decline -- and the rise of intra-BRICS cooperation is one of them. Non-Western powers will continue to take on greater responsibilities -- and it is quite natural that in some instances they'll do so without their Western peers. Chinese investment in Africa and Latin America, India's growing military capacity and Brazil's attempt to negotiate an Iran nuclear deal under former president Luiz Inácio Lula da Silva are all examples of this new multipolar reality.

Our Western-centric world view thus leads us to underappreciate not only the role non-Western actors have played in the past and play in contemporary international politics, but also the constructive role they are likely to play in the future -- as is the case with the BRICS-led New Development Bank, which provides tangible public goods.

All this suggests that intra-BRICS cooperation is here to stay. And while the transition to genuine multipolarity -- not only economically but also militarily and regarding agenda-setting capacity -- will be disconcerting to many, it may be, in the end, far more democratic than any previous order in global history, allowing greater levels of genuine dialogue, broader spread of knowledge, and more innovative and effective ways to address global challenges in the coming decades.

Oliver Stuenkel is a Professor of International Relations at the Getulio Vargas Foundation (FGV) in São Paulo. He is the author of The BRICS and the Future of Global Order (2015) and Post-Western World (2016).

World News: "Why the West Struggles to Understand the BRICS"