Where Support For Autocracy is Strongest 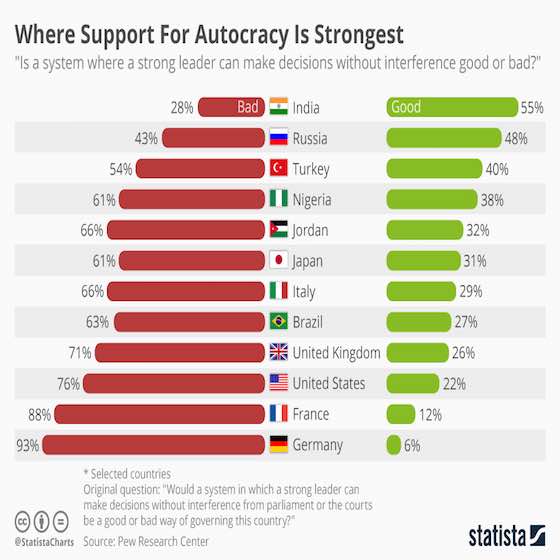 Where Support For Autocracy is Strongest

This chart shows responses to 'is a system where a strong leader can make decisions without interference good or bad?'

According to a Pew Research Center survey, rule by strong leader is an unpopular concept in most countries.

That is especially true in Europe and particularly in Germany where autocratic rule has had devastating consequences in the past. Currently, 93 percent of people in Germany are against a system where a strong leader can make decisions without interference from parliament or the courts.

Elsewhere in Europe, there are some places where support does rise; in the UK and Italy, over a quarter of people think autocracy is a good type of governance. In Russia, support for a strong leader rises to 48 percent, not too surprising considering people there still prefer Stalin to Gorbachev.

World News: "Where Support For Autocracy is Strongest "