The Limits of Power in the Nuclear Age 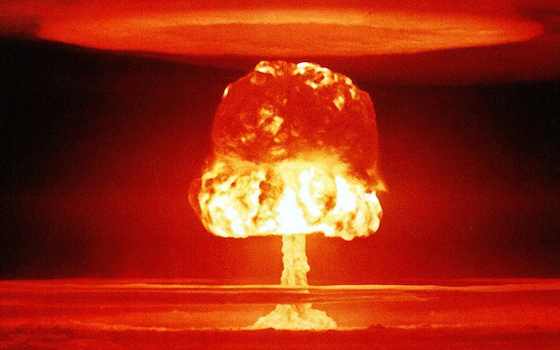 The Limits of Power in the Nuclear Age

Two recent news stories underscore how the world of power politics has changed since the darkest days of the Cold War, when the threat of nuclear Armageddon hung over the globe.

The first is President Obama's acknowledgment that there is, in his words, no "military solution" to the Russian invasion and annexation of Crimea. His statement in one stroke lifted the once-terrifying cloud of a nuclear exchange between and the Russian empire. His remarks in confirmed that such a catastrophe is today "unthinkable."

The second story is that 92 officers manning intercontinental ballistic missiles at a nuclear arsenal in have been relieved of duty for cheating on readiness tests. Morale at was so low, presumably out of lack of promotion possibilities, that the officers conspired among themselves to leak test questions and assure the highest scores.

These once-heralded guardians of freedom have become largely forgotten watchdogs in an around-the-clock exercise of another era, when the threat of what was called a policy of MAD -- for mutual assured destruction -- kept the world hanging on a thin thread. Indeed, the huge cost of maintaining 450 Minuteman III ICBMs, along with a settled recognition that they are unlikely ever to be used, has brought talk of sharp cutbacks.

In a sense, the development is a triumph of rationality over fear, for the time being at least.

Generations of Americans are too young to recall the earliest days of the development of long-range nuclear weapons and the arms race between the two major powers in the post-World War era. They missed the massive mind inoculation of such a threat in the American culture of the time.

Schoolchildren were obliged to practice classroom drills of ducking for cover under their desks at the ringing of a bell. The Pentagon promoted the construction of basement "fallout shelters" of thick concrete blocks offering questionable shielding against lethal nuclear ashes that would rain down for miles in such an exchange.

As a reporter at that time, in a place considered by some to be "ground zero" for such a Russian attack, and as the father of three small children, I laboriously built one myself in the basement of my rambler in not far from the Pentagon. Debate swirled over the moral imperative of welcoming neighbors in.

In the best-selling 1962 novel "Fail-Safe," and in the subsequent movie of the same title, an American nuclear bomber flies past the point of no recall, obliging the American president, played by , to negotiate with Soviet leader Nikita Khrushchev, whereby a U.S. bomber targets when is destroyed. It was realistic and chilling.

Another movie, "Dr. Strangelove," humorous for the most part but ultimately unsettling, cast as a crazed American general and in dual roles as the American president and a mad science adviser. It ends with the U.S. pilot, cowboy-like, straddling a nuke and riding it down to oblivion as if it were a bucking bronco into a huge mushroom cloud.

All this may seem sheer fantasy to young eyes that did not witness those years when the possibility of a nuclear exchange was taken seriously. The fear briefly was real enough during the 1962 Cuban Missile Crisis, when Soviet missiles were discovered 90 miles from . Only 11th-hour negotiations between President and Khrushchev averted the calamity.

It was a dash of cold water that in the end drove home anew the folly and futility of nuclear war. Half a century later, President Obama, faced with the Russian grab of Crimea, has been able to declare there is no military solution, with considerable sober concurrence at home, despite conservatives' wails over the weakness in the Oval Office.

Obama's response, rallying Western allies and the to impose strong economic sanctions on Russian President and his business-partner "cronies," is a recognition of maturity in the power game of the new century.

"The Limits of Power in the Nuclear Age"