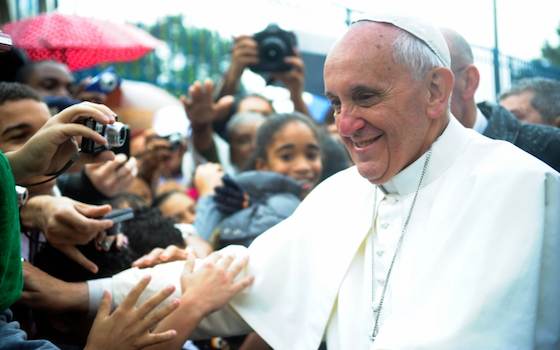 For all his humble charm, Pope Francis has been getting under the thin skin of some rich members of his flock.

As remarked, the rich are different from you and me. They expect deference and coddling, especially for their charitable deeds, and when they don't get it, they take their riches and go home. At least that's the message one high roller has sent to the American hierarchy.

, the billionaire cofounder of and a major Republican backer, has insinuated that Francis should lighten up on his critiques of the corrupting influence of wealth, the problems of inequality and trickle down economic theories that too often do little to aid the poor.

The reason: Pope Francis is scaring away the big donors. He's offending the deep pockets that keep the facades of the faith gilded and glittering.

Somehow, it's doubtful that this pope, who has shunned so many of the ornate trappings of the Vatican, is shocked by the continuing backlash to his apostolic exhortation published in late November that contained sharp observations about capitalism, wealth and inequality. And it's unlikely this will be the last we'll hear of how the pope's missives are unnerving people who have become used to the protective screen of entitlement their wealth affords.

Langone is leading the drive to raise for the renovation of in . He told that he warned Cardinal that a deep-pocketed philanthropist is hesitant to make a seven-figure donation because he's offended by the Holy Father's views.

You can't get any more petulant, or, shall we say "holier than thou," than that.

"I've told the cardinal, 'Your Eminence, this is one more hurdle I hope we don't have to deal with. You want to be careful about generalities. Rich people in one country don't act the same as rich people in another country,' " Langone said he explained to Dolan.

Only a small portion of the more than 200-page papal document "Joy of the Gospel" dealt with economics. But the pope raised the issue of how inequality can isolate people and harden their hearts to what any Christian knows is among Jesus' central teachings: that we must help those in need.

"To sustain a lifestyle which excludes others, or to sustain enthusiasm for that selfish ideal, a globalization of indifference has developed," Francis wrote. "... (W)e end up being incapable of feeling compassion at the outcry of the poor, weeping for other people's pain, and feeling a need to help them, as though all this were someone else's responsibility and not our own. The culture of prosperity deadens us; we are thrilled if the market offers us something new to purchase. In the meantime all those lives stunted for lack of opportunity seem a mere spectacle; they fail to move us."

Not surprisingly, the crude mouth of was among the first to spit back. Limbaugh called Francis' views "pure Marxism."

Others took a condescending tone, arguing that Francis is ignorant of American capitalism.

(Somewhere, a nun who did her best with young Ryan in parochial school is cringing.)

Francis is doing exactly what a religious leader is supposed to do: challenge followers to examine the lives they are leading. The fact that he's broadening the conversation to include aspects of life that go beyond throwing a few shillings into a collection plate is a good thing.

He's framing the message of the church in a modern context: discussing inequality, the legal and social institutions that exclude the poor and that permit the wealthy to be indifferent.

The problem conservatives have with the pope is that what he's saying threatens well-codified systems of power, esteem and privilege.

But Pope Francis has long been about challenging power, esteem and privilege.

As a bishop and then archbishop in , Francis made priests live in the slums. As pope, he's been known to attend daily mass, seated alone at the back pews, with the many domestic help that work at the Vatican.

He has literally followed the example of Christ, washing the feet of criminals, and has stroked and consoled those suffering from horrendous disease.

Pope Francis isn't criticizing the wealthy for their money. He's questioning the morality of ever-widening inequality and the way systems develop to shield some people's wealth at the expense of opportunity for others.

It's a far more insightful, a more God-filled message, than his critics are willing to hear.