The World's Most Liveable Cities 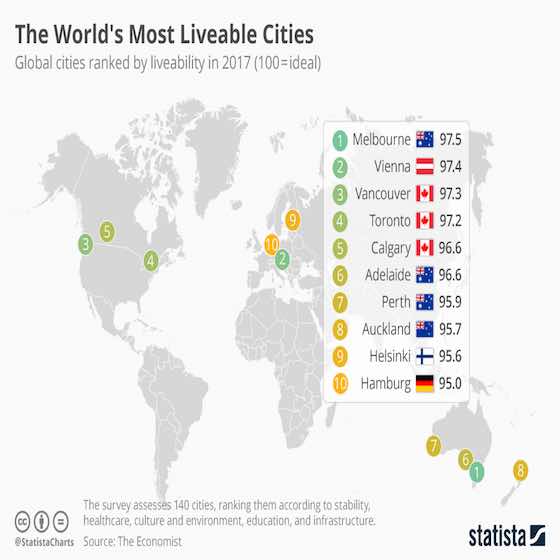 The World's Most Liveable Cities

If you want to move to one of the world's most liveable cities, pack your bags and book flights to Australia or Canada.

The Economist assessed 140 major cities worldwide on stability, healthcare, culture and environment, education, and infrastructure, declaring Melbourne the most liveable city in 2017 for the seventh year running. Australia's second most populous city scored 97.5 out of 100. Vienna, the Austrian capital, came second and three Canadian cities rounded off the top five - Vancouver, Toronto and Calgary.

As well as those three Canadian cities, a total of three in Australia made the top-10 list (Adelaide and Perth as well as top-placed Melbourne). Interestingly, U.S. cities are notably absence from the top of The Economist's list with Auckland, Helsinki and Hamburg all boasting high liveability scores. The Syrian capital of Damascus was at the very bottom of the ranking with a score of 30.2, along with Lagos in Nigeria (36.0) and Tripoli in Libya (36.6).