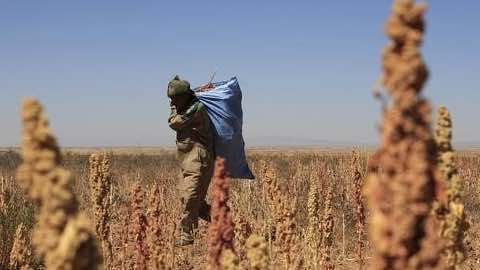 The world's indigenous peoples who may hold the solutions on how to feed a growing population and cope with the impact of climate change, according to researchers.

Using the contents of a deer's intestines to make soup may not be everyone's cup of tea, but then neither was quinoa before it became a trendy superfood known for its health benefits.

Both are foods of indigenous peoples who may hold solutions on how to feed a growing population and cope with the impact of climate change, campaigners and researchers said at an international food festival in the Italian city of Turin.

Just three crops provide 60 percent of the world's calories: rice, wheat and maize, according to the U.N. Food and Agriculture Organization (FAO), leaving the global food larder vulnerable to changes in climate and the spread of new plant diseases.

Indigenous peoples are some of the few who can expand the world's food base, said Yon Fernandez de Larrinoa, indigenous peoples team leader at the U.N. Food and Agriculture Organization (FAO).

Their means of growing food is an important model as the world grapples with how to grow enough to feed a population which is expected to reach 9.7 billion by 2050, up from more than 7 billion today, Fernandez de Larrinoa said.

But their way of farming is threatened both by pressure from companies wanting to take their land, and a growing number of indigenous people themselves wanting to move to cities, he said.

Indigenous peoples live on or use 25 percent of the world's land, and they protect 80 percent of global biodiversity, according to the World Bank.

They are innovative, extremely resilient and successful at adapting to climate change, said Vanda Altarelli, a specialist in indigenous issues and president of SONIA, a Rome-based non-profit group that works with marginalised groups worldwide.

They can monitor changes in climate by observing the abundance of flowers, changes in skin colours of wild animals, and the flight direction of birds, she said.

Depending on the weather, indigenous peoples change where they grow crops and when, and how they prepare the soil. In years when the weather is hard to predict they plant drought resistant crops alongside those which are flood resistant, she said.

And they often test new plants to see how they grow.

"Indigenous food systems do not consume the capital - they live from the interest, the profit. They don't deplete the forest, they eat from the forest while they preserve the forest," said Fernandez de Larrinoa.

Many traditional indigenous foods, once shunned by urban consumers, are increasingly fashionable.

"There's a lot of medicinal and health benefits in indigenous foods which have been despised and discriminated against. Suddenly now they are being looked upon as the cure."