Importance of a Nation's Capital 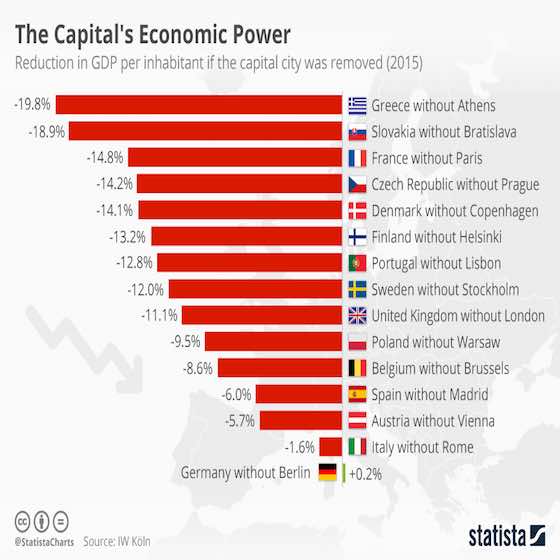 Importance of a Nation's Capital

This chart shows how much a country's capital contributes to overall national GDP and the reduction in GDP per inhabitant if the capital city was removed.

Have you ever wondered just how important a capital city is to a country's economy?

New research from the Germany-based Institut der deutschen Wirtschaft Köln reveals that in Europe at least, capital cities form the beating heart of most economies. Greece and Slovakia are notable examples. If Athens and Bratislava were removed from both countries, GDP per inhabitant would drop 19.8 and 18.9 percent respectively. France without Paris would also see productivity fall 14.8 percent while the UK minus London would bring about an 11.1 percent fall in productivity per inhabitant.

Germany is an exception, however.

Even though Berlin has been described as "poor but sexy" by its former mayor, the German capital is struggling with high unemployment, poverty, debt, outdated infrastructure and an education system in need of an overhaul. If Berlin was removed from Germany, GDP per inhabitant would actually go up 0.2 percent.