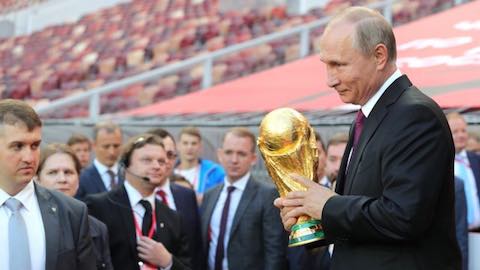 A quarter-century after the end of the Cold War, we unexpectedly find ourselves in a second one. It is both different and familiar.

The Cold War lasted four decades, in many ways both beginning and ending in Berlin. The good news is that it stayed cold -- largely because nuclear weapons introduced a discipline missing from previous great-power rivalries -- and that the United States, together with its European and Asian allies, emerged victorious, owing to sustained political, economic, and military effort that a top-heavy Soviet Union ultimately could not match.

A quarter-century after the end of the Cold War, we unexpectedly find ourselves in a second one. It is both different and familiar. Russia is no longer a superpower, but rather a country of some 145 million people with an economy dependent on the price of oil and gas and no political ideology to offer the world. Even so, it remains one of two major nuclear-weapons states, has a permanent seat on the UN Security Council and is willing to use its military, energy and cyber capabilities to support friends and weaken neighbours and adversaries.

This state of affairs was anything but inevitable. The end of the Cold War was expected to usher in a new era of friendly Russian ties with the United States and Europe. It was widely thought that post-communist Russia would focus on economic and political development. And relations got off to a good start when Russia, rather than standing by its long-time client Iraq, cooperated with the US in reversing Saddam Hussein's invasion of Kuwait.

The goodwill did not last. Just why will be a matter of debate among historians for decades to come. Some observers will blame successive US presidents, pointing to a lack of economic support extended to a struggling Russia, and even more to NATO enlargement, which, by treating Russia as a potential adversary, increased the odds it would become one.

It is true that the US could and should have been more generous as Russia made its painful transition to a market economy in the 1990s. Nor is it clear that NATO enlargement was preferable to other security arrangements for Europe that would have included Russia. That said, the lion's share of the responsibility for the emergence of a second Cold War is Russia's, and above all Vladimir Putin's. Like many of his predecessors, Putin viewed the US-dominated world order as a threat to his rule and to what he regarded as his country's rightful place in the world.

Russia in recent years has used armed force to seize, occupy and annex Crimea, in the process violating the fundamental principle of international law that borders may not be changed by armed force. Putin continues to use military or covert means to destabilise Eastern Ukraine, Georgia and parts of the Balkans. And Russia employed military force in particularly brutal ways in Syria to prop up Bashar al-Assad's appalling regime.

Putin's Russia also went to great lengths, in the words of US Special Counsel Robert Mueller, to carry out 'fraud and deceit for the purpose of interfering with the US political and electoral processes, including the presidential election of 2016'. Heads of US intelligence agencies have made clear that they expect further such efforts between now and the midterm congressional elections in November.

As Russia has become a revisionist country, with few if any qualms about overturning the status quo by whatever means it judges necessary, shoring up Europe's defence and providing lethal arms to Ukraine is a sensible response. But what more should the US do, beyond reducing the vulnerability of voting machines and requiring technology firms to take steps to prevent foreign governments from trying to influence US politics?

First, Americans must recognise that defence is not enough. Congress is right to call for additional sanctions, and Donald Trump is wrong to refuse to implement sanctions that Congress has already passed.

The US government also needs to find its voice and criticise a Russian regime that arrests its opponents and reportedly murders journalists. If Trump, for whatever reason, continues to coddle Russia, then Congress, the media, foundations and academics should publicly detail the corruption that characterises Putin's rule. Circulating such information might increase internal opposition to Putin, persuade him to hold off on further interference in US and European politics, and, over time, buttress more responsible forces within Russia.

At the same time, the objective should not be to end what little remains of the US - Russian relationship, which is already in worse shape than it was for much of the first Cold War. Diplomatic cooperation should be sought whenever it is possible and in America's interest. Russia may well be willing to stop interfering in Eastern Ukraine in exchange for a degree of sanctions relief, if it could be assured that ethnic Russians there would not face reprisals. Likewise, the Kremlin has no interest in a military escalation in Syria that would increase the relatively modest cost of its intervention there.

At the same time, Russian support is needed to tighten sanctions against North Korea. And maintaining arms-control arrangements and avoiding a new nuclear arms race would be in the interest of both countries.

There is thus a case for regular diplomatic meetings, cultural and academic exchanges, and visits to Russia by congressional delegations -- not as a favour, but as a means to make clear that many Americans are open to a more normal relationship with Russia if it acts with greater restraint. The US and its partners have a large stake in greater Russian restraint while Putin remains in power -- and in a Russia characterised by other than Putinism after he is gone.

Richard N. Haass is president of the Council on Foreign Relations and author of A world in disarray. This article is presented in partnership with Project Syndicate © 2018. Image courtesy the Kremlin via Wikimedia Commons.