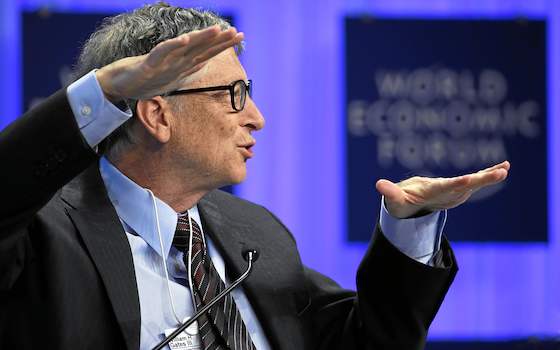 The talk of the day at this year's in Davos, Switzerland, was Bill Gates' audacious forecast that there will be almost no poor countries in the world by 2035.

Was it an outburst of exaggerated optimism by the richest man on earth? Or are there solid grounds to be that upbeat about the future?

In a public letter published shortly before the opening of the Davos gathering, Gates said that the 35 countries that are classified as low-income by the will emerge from that category over the next two decades.

"The belief that the world is getting worse, that we can't solve extreme poverty and disease, isn't just mistaken. It is harmful," Gates wrote. "By almost any measure, the world is better than it has ever been. In two decades it will be better still."

But almost simultaneously, , a non-governmental coalition of 17 anti-poverty and relief organizations, released a study showing a much grimmer picture.

In its report titled "Working for the Few," it said that the 85 richest people on earth own as much as the bottom half of the world's population, or 3.5 billion people. Inequality is rising, and "the extreme levels of wealth concentration occurring today" threaten to exclude hundreds of millions from the benefits of modernity, it said.

Likewise, a survey among its members - some of the world's richest and most influential people - revealed that inequality ranked No. 2, only after a new economic crisis, in the list of what they see as the biggest global risks of 2014.

So who is right? I posed that question to Marcelo Giugale, the head of the poverty reduction programs in Africa and former head of the bank's anti-poverty programs in Latin America, who has just released a book titled "Economic Development: What Everyone Needs to Know."

Giugale told me that, technically, Gates is right. In GDP per-capita terms, the percentage of poor has been declining rapidly over the past three decades, since China and India adopted market economies.

"Extreme poverty, or people who earn less than $1.25 a day, will probably disappear in statistically meaningful ways by 2030, sooner than in 2035," Giugale said. "That should be the easy part."

But the real question is how meaningful that will be. "If we just lift people from poverty by making them earn $1.26 cents a day, it won't be a tremendous achievement," Giugale said.

"We are seeing a huge accumulation of people who are "around" the poverty level, just a bit above the poverty line," he said. "We call them 'vulnerable,' and it looks like we are going to be living in a world with many 'vulnerable' people."

The good news, Giugale argues, is that technology is making wonders to help fight poverty.

For the first time in history, we can identify the poor, and focus on each poor person's specific needs. Until recently, there were 400 million people in India who in many cases didn't even have birth certificates, and about 10 percent of the children in Latin America are not properly registered in national databases, he said.

Thanks to biometric eye-scanning technologies and other similar techniques, increasingly more governments can now devise tailor-made social policies. Instead of offering subsidized gasoline or free college education for all, as is done in many Latin American countries today, they can pinpoint exactly who needs subsidies, and who can pay. "Individualization is the name of the game," Giugale said.

My opinion: While some countries are falling behind because of populist leaders who are more interested in accumulating powers than in their people's well-being, there is no question that the world is better off than before.

The percentage of the world's population living in extreme poverty is falling - from 43 percent of the population in 1990 to 20 percent today, according to figures, and we are living longer and better lives. When people see the glass half-empty, I always remind them what it must have been like to go to the dentist 100 years ago, when they extracted your teeth without anesthesia.

Now, the big challenge will be to put more technology - which today is used mainly for the rich - at the service of the poor.

It would be great if more countries could follow Giugale's recommendation and use technologies to individualize the poor instead of subsidizing the rich.