The News Should Aim to Improve Our Lives 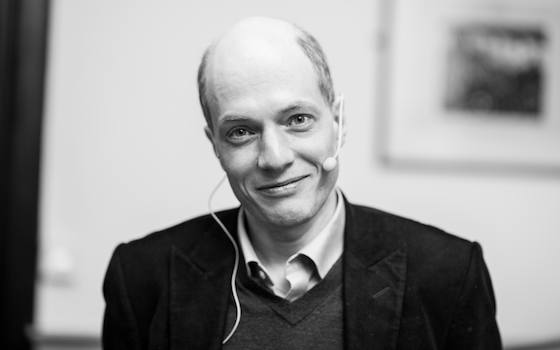 Alain de Botton -- author of books on love, religion and Proust -- explains why the news agenda should be more positive and how the news should aim to improve our lives

Is the news our society's religion today?

In the developed economies, the news now occupies a position of power at least equal to that formerly enjoyed by the faiths. Matins has been transubstantiated into the breakfast bulletin, vespers into the evening report. It also demands that we approach it with some of the same deferential expectations we would once have harboured for the faiths. Here, too, we hope to receive revelations, learn who is good and bad, fathom suffering and understand the unfolding logic of existence. And here too, if we refuse to take part in the rituals, there could be imputations of heresy.

It feels like there is always an infinite amount of news, so much is happening in the world every day. Yet after a while it becomes clear that the same kinds of event are recurring again and again. The details change, but all circle round the same archetypal story. Men in highly responsible positions are coming unstuck because their desires lead them to do things that, when made public, are shameful.

Identifying the underlying theme is more important in the long run than going through the details of every case. The news that matters is not so much that this MP or banker did what they did. What we need to address is why such things happen.

How do you keep the public interested in the news that does matter?

We cannot be collectively dragged into being more responsible through guilt. The Arctic ice is melting and this is going to have major, lasting implications for sea levels and weather around the world. A few people care a lot but, strangely, Taylor Swift's legs are far more captivating. The starting point has to be indulgence towards the way our minds work. We are interested in Swift's legs not because we are evil -- but because we are wired in unhelpful ways. If we are going to be interested en masse in the defrosting poles, we need to take our fragilities on board and therefore get serious about trying to make important news not just 'important', but also beguiling. Then things stand a chance of changing.

You argue that we should set aside 'neutral reporting'. Are you asking for more bias?

Many people imagine that what makes news organizations serious is their ability to provide us with information that is 'unbiased'. But facts can only become meaningful and relevant to us when they slot into some picture of important or trivial, right or wrong. News organizations that vaunt their neutrality forget that neutrality is simply impossible. There is no risk-free, all-knowing sober set of answers to cling to. At heart, the word 'bias' simply alludes to the business of having a 'take' on existence. One may have a better or worse take, but one can't make any sense of the flotsam of daily events in the news without having one. All of the figures we revere in history have been highly biased: each of them had a strong sense of what mattered and why, and their judgments were anything but perfectly balanced. They were just flavoured in the right way. We don't need news stripped of bias, we need news presented to us with the best kinds of bias.

What is the purpose of foreign reporting?

Foreign reporting implicitly defers to the priorities of the state and of business, occupying itself almost exclusively with whom and where we should fight, trade or sympathize. But it should instead offer us a means by which to humanize the Other who instinctively repels, bores or frightens us and with whom we can't, without help, imagine having anything in common.

Foreign countries also furnish a scale against which our own nation and ways of living can be assessed; they may help us to see our national oddities, blind spots and strengths. Stories from them may lead us to a fresh appreciation of the imperfect freedoms and comparative abundance of our homelands, which otherwise would be treated only as matters for grumbling or blame. Alternatively, problems with which we are all too familiar may be revealed to have been solved better elsewhere.

You mention the importance of historical perspective in reporting, so that we can respond to issues with context.

Contrary to what the news usually suggests, hardly anything is ever totally new, few things are truly amazing and very little is absolutely terrible. The economic indices are grim, but we have weathered comparable drops many times over the past century and even the worst scenarios only predict that we will return to a standard of living we had a few decades ago. A bad avian flu may disrupt international travel and defeat known drugs for a while, but research will eventually understand and contain it. The floods look dramatic, but in the end, they will affect merely a fraction of the population and recede soon.

How can photography change the way we report news?

There are now more images than ever before in the coverage we consume, but the problem lies in the lack of ambition behind their production and display. We might usefully divide news photographs into two genres. The first are images of corroboration, which do little other than confirm something we have learnt about a person or an event through an accompanying article. The second is a rarer kind of image, the photograph of revelation, whose ambition is not simply to back up what the text tells us but to advance our level of knowledge to a new point. It sets out to challenge cliche. We have lost any sense of photography's potential as an information-bearing medium, as a force to properly introduce us to a planet that we keep conceitedly assuming that we know rather well already.

Do you feel oppressed by the news?

The pressure of not missing out makes one feel one has to care about a given topic, even when one doesn't want to. Take Mandela's funeral. One was supposed to care a lot, and yet, you don't. You know the reasons why it is important, but they don't grip you because you are focused elsewhere on subjects that, while tiny in the grand scheme of things, matter a lot within your context. It would be dangerous if hardly anyone paid attention to what the Government was doing, or what was happening to the environment. But it is not right to go from this to the demand that everyone should be interested in every item whenever the news machine calls. We badly need people whose attention is not caught up in the trends of the moment and who are not looking in the same direction as everyone else. We need people scanning the less familiar parts of the horizon.

Do you think we get the news we deserve?

Much of what we now take for granted as news has its origins in the information needed by those people taking major decisions or who are at the centre of national affairs. Ease of communication and a generous democratic impulse means that selections from the knowledge base, originally designed for decision-makers, now gets routinely sent via the media to very large numbers of people. It is as if a dossier which might properly arrive upon the desk of a Minister has accidentally been delivered to the wrong address and ends up on the breakfast table of an electrician in Pitlochry. Every day the news gives us stuff that is both interesting for some people and irrelevant to you. No wonder we're sometimes a bit bored. It's not our fault.

"The News Should Aim to Improve Our Lives"