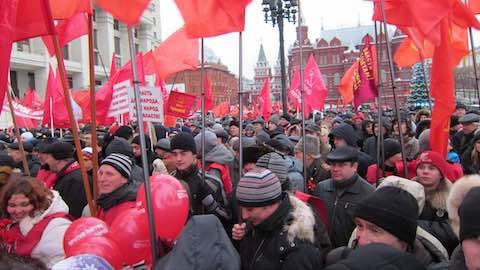 Iranians were reported to be dutifully casting their ballots in a parliamentary election, having been exhorted by their leaders to vote in unprecedented numbers not only to erase the bitter memories of the contested presidential poll, but to "smack the face" of their enemies.

Russian voters were likewise urged to send a message to those foreigners who would like to divide Russia by voting (ideally) for Vladimir Putin.

One election was parliamentary and the other presidential, but they were both exercises in political theatre, in which the middle classes were absent, the grateful poor voted en masse, the opposition protested, and fraud was alleged. Here, of course, we must distinguish between the official opposition - allowed to run but with little real chance or indeed desire to win - and the genuine opposition, which is effectively disbarred. In Iran, for example, while it was reported that the opposition boycotted the poll, the cause of this boycott was that none of their candidates were allowed to run.

In both cases, the elections delivered the figure of 65 per cent, comfortably close to a two-thirds majority. In Russia, with only 22 per cent of the votes counted, Putin declared victory, claiming some 64 per cent of the entire tally, a figure that would decline to 63 per cent the next day, though with a resounding 65 per cent turnout. (Putin's margin of victory, and the manner in which it was announced, bore a remarkable similarity with President , complete with allegations of fraud).

In Iran, the authorities announced a turnout of 64 per hours before the polls closed although, unlike in 2009 when the count itself was extraordinarily rapid, on this occasion details of the successful candidates were not immediately available. There was only one slip. A relaxed head of the elections commission, , said on an election programme that turnout had been just above 34 per cent before swiftly correcting himself and adhering to the script that had been outlined some weeks earlier by Ayatollah Ali Khamenei's representative in the Revolutionary Guards ("polls indicate that 60-65 per cent of the public will participate"). The prediction was later confirmed to have been uncannily accurate by , the Guards' preferred media outlet, which on February 29 forecast a 65.5 per cent turn-out. It had also predicted , the father-in-law of Khamenei's son and putative heir, Mojtaba, would garner the greatest number of votes in Tehran and therefore be in lead position to become Speaker of the new Parliament. That, too, appears to have come true.

The elites in Iran and Russia have long developed an intimate political relationship founded on economic interest and a mutual antipathy for the West. But the parallels in these elections suggest a script being developed and applied.

Sixty-five per cent has, by all accounts, become the new 99 per cent favoured by dictatorships of the past. Sixty-five per cent passes the credibility threshold for a new educated public, and for prying foreign journalists. On a good day the government claims a decisive victory, on a bad day there is sufficient political dead space for an opposition to exist and protest. Cleverly spun, this 35 per cent simply exists to reinforce and legitimise the 65 per cent that turned out and/or voted for a particular candidate. It creates the fiction of plurality. Moreover, the state does not have to prove the integrity of the elections; the state is innocent until proven guilty - a right it does not grant its own citizens.

There is even room to acknowledge a measure of fraud on the basis that it would not affect the overall result. The Iranians are arguably not as well practised as the Russians, which has led them to adhere to the script more clumsily - the Russians for example avoided the temptation of revealing the percentiles beforehand.

So what might be the consequences for Iranian politics? In policy terms, not much at all. There was no real contest to be had, and not much of a clash of personalities between Ahmadinejad and his one-time patron Ayatollah Ali Khamenei. Although some have suggested that Ahmadinejad is the more moderate, the difference was so slight as to be indistinct.

Consequently many Iranians, already disillusioned by the experience and the repression that followed, were hard-pressed to generate any enthusiasm for politics. What was perhaps more striking was that many of Ahmadinejad's supporters, finding that their preferred candidates had now likewise been barred from running, declared that they, too, would boycott the election. Moreover, some key ideological allies of the Supreme Leader were found it difficult to get excited.

This left the state with a dilemma because it desperately needed a high turnout, not only to wipe away the stain but, more immediately, to prove to themselves and the outside world that the remained robust and popular. Their first approach was to try and generate enthusiasm through the promotion of multiple political platforms.

Given the absence of any serious policy differences, the fact that people would have to choose between factions that supported Ahmadinejad and those that supported the Leader was not a promising start for those charged with cultivating excitement. No amount of renaming of factions could persuade people that they were being asked to participate in anything more than a charade. So desperate did the situation become that Ayatollah Khamenei decided to issue a fatwa which said that voting was a religious duty. Failing that, the state resorted to the propaganda tool of choice: nationalism.

In a remarkable broadcast on Iranian TV, martial music with overtones of the popular nationalistic anthem O Iran, overlay a series of images from contemporary Iranian history with special focus on the resistance and sacrifice of the Iran-Iraq War. The message, reinforced by officials, was that this election was fundamentally about national unity and resistance to the West.

The final act in this political production was to anticipate any criticism by announcing the desired result (in this case a high turnout) well before anyone had time to review the data.

Unlike Russia, Iran had no independent monitors on the ground. We will probably never know the actual turnout, but we can be relatively confident that popular enthusiasm was a shadow of its former self. For the governing elite, the reality is of less importance than the impression created. As anticipated, Iranians were far more pre-occupied with their economic difficulties and the upcoming festivities for the Persian new year. Khamenei, for his part, will be relieved that this latest test has been passed and if, further emboldened, he now moves to abolish the office of president altogether, (a prospect he has suggested), it may be the last 'election' he will have to endure for some time.

is professor of Iranian History at and an associate fellow in the Middle East and North Africa Programme at Chatham House.