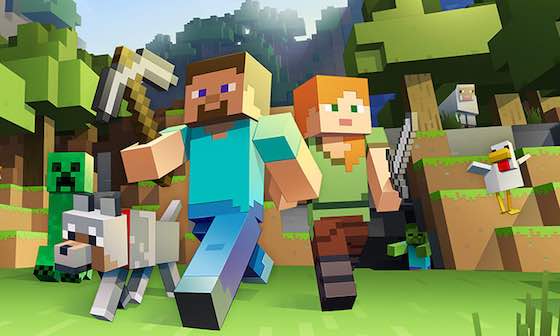 'Minecraft' is the greatest little online game you've never played. Well, unless your one of growing community of gamers (207,294 at last count) that have signed up and begun playing. In which case I won't be telling you anything new, but for everyone else here's a preview

"Minecraft" is the creation of the bearded Swedish programmer (who goes by "Notch" on the site). The guy behind the game's soothing classical sounding music is (also known as "C418"). Gameplay in "Minecraft" consists mostly of destroying and placing blocks in a 3-D world. That's pretty much it.

I have to admit that at first that sounds like a dumb or at least overly simplistic idea for what would end up being a rather dull videogame. Then again, "Katamari Damacy" was a game where all you did was roll things up into a ball, so maybe such a simplistic description is a bad idea as it fails to convey just how fun this game really is. It's actually rather difficult to explain the sheer joy and addictiveness that encapsulates "Minecraft." Luckily though, there's a free demo version playable via the website so you can go and see for your self. Go now. No really, it's okay and you won't miss anything. I'll just wait here until you get back.

See, I told you I'd wait. Now back to the preview.

In "Minecraft," you explore a strange cubist world via through the eyes of your avatar. The main mouse button is used to dig up and remove cubes of earth, stone, wood, ore,etc, while the alt mouse button is used to place blocks wherever you want (Though new blocks must initially be attached to other blocks, and certain materials like sand and water obey gravity). In classic FPS style, your in game avatar is moved by a combination of the mouse, the WASD keys, and the spacebar (to jump). The "I" button opens your inventory, "esc" opens the menu and that's about it for the controls. But that's really all you need.

"Minecraft" is still in alpha, but there are currently two game modes available, Survival mode and Creative mode.

In Survival mode, your character wanders though a randomly generated map. Players can choose number of settings at the start of the game that shape how the world forms. They can choose between tropical islands, rolling hills or floating mountains (like in the movie "Avatar"). Additionally, players can choose themes such as an endless forest or dark reddish hellscape, as well as other preferences like the map's size and shape.

Survial mode starts you off with just a small wooden house lit by a pair of torches. The torches are there to save your life because in survival mode, monsters spawn wherever it's dark. So when night eventually rolls around, the countryside becomes littered with cute cubic monstrosities whose only desire is to see you dead. Currently the game only contains about 4 types of nasty beasts to fight. These include arrow shooting skeletons, lurching zombies, giant hopping spiders and odd green kamikaze things called Creepers.

So your house is initially your little oasis of safety and light in a harsh and cruel world. When you dig up a section of dirt or any other type of material (other than water), the block is sent to your inventory, where it sits until you place it somewhere. So you can easily start expanding your home by digging up blocks of dirt and using them to build walls and new rooms. Or you can just skip all of that and burrow into the side of a hill and start on your own little bunker or hobbit hole.

What players will immediately notice is that other materials like trees (made of a column of wood blocks topped with leafy blocks) or stone take a heck of a lot longer to dig through than dirt. However, by harvesting wood from trees you can make crude wood tools that make this easier. Shovels make digging through dirt go faster, axes speed up harvesting trees and pickaxes let you tunnel through stone. By mining down into the land you can find coal and metal ores that are used to make better tools, weapons and armor. Be careful though, if you dig too far and break through to a lake or the sea, expect to drown rather quickly as your mine fills with water.

You can also find vast cave systems populated by even more murderous monsters, including the Creepers, these annoying hissing things that explode violently if they get near you. On the up side though, if you kill them they drop gunpowder which can be crafted into heavy explosives. Actually, most NPCs drop something useful if killed. Spiders drop silk you can use as bow strings, zombies drop arrowheads, skeletons drop arrows, sheep drop wool and pigs drop pork (which is used to refill your health bar).

Players also have the option of doing a little farming. Tree branches can be placed on the ground and will eventually grow into new trees -- as can wheat, which is used to make bread (another healing item).

In contrast, Creative mode places you in a peaceful world with an infinite supply of every type of block in your inventory. You can build and experiment to your heart's content without having to worry about giant spiders or zombies. And unlike Survival mode, blocks are removed instantly with a single click of the mouse, giving you the speed and freedom to produce whatever you may desire.

Creative mode also includes the only multiplayer in "Minecraft" so far. You can host your own server, visit a friend's server, or check out one of the hundreds of servers already up. Either way, in creative mode you're able to fly around and build like crazy with your friends. My first experience with this had me visiting a friend's sever. As I was new, I had not yet been granted the right to add or remove any blocks by the admin (these controls stop people from just popping in and destroying someone's work) so I ended up just sitting back and watching a group of five people build a replica of the Kremlin.

It's here in the Creative mode that "Minecraft" gets really impressive as some of the projects fans have worked on are truly astounding.

Creative mode is also home to the only competitive aspect of "Minecraft" so far, a sport called Spleef. In a round of Spleef, players start off standing on a floating platform, and using the chat function, someone starts counting down from three. At zero, the game starts and everyone runs around deleting the blocks under each other while trying not to fall through the holes. The winner is the last person standing on the platform. It's quick, simple and an example of the kind of odd creativity "Minecraft" inspires.

While "Minecraft" is still in alpha, a rough but playable version of the game is currently available to anyone who happens to wander by the site. In Survival mode players can't do any crafting, but the core of the gameplay is still there for people to get a feel for. However, in this free version, neither of the two gameplay modes has a save function.

Fans who register (for free) gain access to a save function for both modes, as well as access to the Creative mode's multiplayer function. If you're willing to pay the 9.95 pounds (about US) required to preorder the game, you get access to the current build of the game -- which includes all the bells and whistles (such as an inventory and item crafting).

Among the content expected to be added before the game goes beta, are three additional game modes. In Zombie siege mode, players will be pressed to build and fortify their homes during the day in order to survive the zombie hordes that will arrive when the sun sets. Little is known about "Capture the Flag" mode other then it being a team based PvP game mode. Finally, "Dungeons and Levers" mode is supposed to replace building with a much heavier emphasis on combat and exploration, as well as the addition of new monsters, items and traps. While other content may be planned for the eventual Beta release, little is known about it. However the game's forums are filled with hundreds of content suggestions as well as a bounty of rumors regarding what exactly Notch plans on including in the game.

All in all "Minecraft" is a fun little game and I can't wait to see the final version. It's worth the bucks for the pre-ordered version, but you can still have a lot of fun with the free version. So go to the site and give it a whirl. And as far as free timewasters go, it beats the hell out of "FarmVille."