Wal-Mart Does Something Right 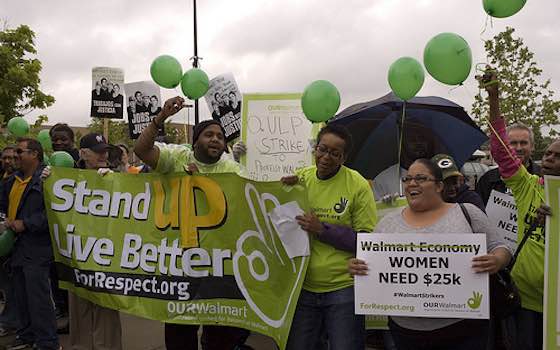 Once, I indirectly forced a neighbor to drive far out of her way for a head of broccoli. I think she’s forgiven me, but I’m not sure the love is still the same.

She was kindly caring for my child and running errands when she turned toward Wal-Mart for a quick stop. My kid was horrified.

As they approached that dreaded house of low wages, worker exploitation, and gender discrimination, my child cried out: “No, Miss Edie! You can’t go to Wal-Mart!”

Who knew she’d been listening to my tirades each time we passed the behemoth?

Miss Edie patiently listened to a detailed lecture about the “high cost of low prices,” and drove several towns away to accomplish her errands without offending my child.

Workers with OURWalmart -- a mobilized community of current and past Wal-Mart employees -- have taken the company to task for its refusal to offer living wages, regular schedules, basic benefits, or equal opportunity. Staffers have sued the retail giant for illegally disciplining workers mobilizing for better conditions, mistreating pregnant employees, and stealing wages.

Most infamously, Wal-Mart pays some of the lowest wages in the retail industry. The Center for American Progress recently reported that most of its sales workers make less than $25,000 a year.

Taxpayers are forced to subsidize these poverty wages. Many Wal-Mart workers rely on public assistance programs like Medicaid and food stamps to make ends meet, at a cost of over $6 billion a year.

But for all that, it’s important to acknowledge when the company does something right.

Wal-Mart recently announced that it’s boosting its base pay to $9 an hour in April, and to $10 an hour next year. In all, the corporation says, half a million of its workers will get a raise.

Even better, Wal-Mart is rolling out fixed schedules to some of its associates starting next year. Workers will also be offered the chance to sign up for open shifts if they prefer.

This change comes after years of sustained campaigns by Wal-Mart workers to raise their pay, as well as a coordinated national campaign to raise the federal minimum wage. Other big-box retailers, including Costco, raised their own wages in recent years, putting more pressure on Wal-Mart to follow suit.

And as of this year, 29 states and the District of Columbia have imposed minimum wages that exceed the federal minimum, forcing about one-third of all Wal-Mart stores to hike up their base pay anyway.

But that doesn’t mean this recent action isn’t important.

Though the raise is modest, some analysts predict that other low-wage employers, especially in retail and fast food, could feel pressure to follow Wal-Mart's lead. Already, the T.J. Maxx-Marshalls-Home Goods conglomerate has announced a wage hike of its own.

This isn’t the first time activists have pressured Wal-Mart to do the right thing.

In 2010, the company became a leader in the movement to “Ban the Box,” eliminating the boxes on employment applications that require up-front notification of an arrest or conviction. These boxes have kept many formerly incarcerated people out of work.

So does all this feel-good news mean that I don't have to guilt my friends and neighbors into traveling long distances for more expensive household products?

Given its $16-billion profit margin, Wal-Mart can afford to pay much more than its recent modest increase. Many workers will still rely on public assistance to make ends meet, even while Wal-Mart avoids about $1 billion in federal taxes annually. Allegations of wage theft, discrimination, and illegal punishment of workers still abound in many stores.

But if all my neighbor needs is an emergency head of organic broccoli or some bathroom cleaner and the next store is too far out of her way, I'll ask my child to protest more quietly.

OtherWords columnist Karen Dolan is a senior fellow at the Institute for Policy Studies in Washington, DC. OtherWords.org.

"Wal-Mart Does Something Right "