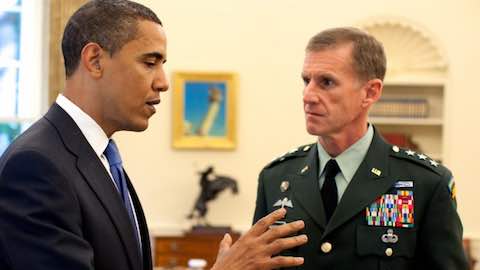 The Obama administration is waging war all over the world -- without congressional authorization.

The death of six US soldiers in Afghanistan on December 21 at the hands of a Taliban suicide bomber brings to 21 the number of US combat deaths there in 2015. Once again we must confront the question of national purpose in waging war without debate or declaration. Like all other battlefield deaths in the Middle East, the Obama administration rationalizes these latest as being part of "training, advising, and assisting," not combat. But those are merely code words for direct interventions that Congress has not authorized since 2002, in clear violation of restrictions the War Powers Resolution of 1973 places on presidential power.

There will be plenty more casualties in the Middle East for years to come, and not just because of the seemingly permanent US military presence in Iraq and Afghanistan. Consider two recent news items. According to a plan not yet formally approved, the Pentagon wants to create a worldwide string of "hubs" as staging areas for Special Operations forces to strike quickly against terrorists. Second, most members of Congress are unwilling to introduce and debate a bill authorizing the Obama administration's use of force in the Middle East and beyond. Thus, there is no end in sight to the US at war, both because the Pentagon has found the perfect enemy and because no one in Congress is willing to stand up to it.

The Pentagon's plan is to have a forward presence that, in the words of Defense Secretary Ashton Carter, "will enable unilateral crisis response, counterterror operations, or strikes on high-value targets." Not long ago the Pentagon's mantra was "places, not bases," so as to avoid all the political problems, as well as the monetary costs, associated with a permanent military presence on foreign soil. Now "places" evidently have been modified to "hubs" and "spokes," Pentagon-speak for small-scale leased bases of the sort already in place all over Africa. Northern Iraq and southern Europe are being considered as additional hub sites.

Not everyone is reportedly on board with the Pentagon's plan. The State Department correctly sees it as a power grab that may actually harm US foreign policy. The plan works at cross-purposes with diplomacy, substituting the deployment and use of force for potential opportunities to engage governments and rival groups. More US military facilities, no matter their size, invite criticism in the host countries, may become targets of terror groups, and feed the hostile propaganda of militants. In our terrorism era, however, State has no chance to win this battle.

The last time anyone in Congress got serious about its war powers was last May, when Representative Adam Schiff (D-CA) introduced legislation to authorize military force against the Islamic State, a step he believed would force debate on what an authorization for war should actually entail. "There is no doubt that our current offensive amounts to war,” said Schiff, the ranking Democrat on the House Intelligence Committee. “Congress should take action both to authorize its prosecution and to set limits on that authorization so it may not be used by any future administration in a manner contrary to our intent.”

Schiff’s proposed Authorization for the Use of Military Force (AUMF) would have limited military action against the Islamic State (ISIS or IS) to three years, prohibited the use of US ground troops, and immediately terminated both the 2001 and 2002 congressional authorizations tied to the 9/11 attacks and the Iraq War, removing two pillars of presidential authority claimed by President Obama as sufficient to go after IS. Neither Schiff's resolution nor a similar one proposed in June by Senators Tim Kaine (D-VA) and Jeff Flake (R-AZ) in the Senate Foreign Relations Committee ever got to the floor of Congress.

Now, however, there is a twist from the previous story: the executive branch wants a new authorization, and it is Congress that is balking. Democrats fear being seen as weak on terrorism if they try to constrain the president while IS is around, and Republicans fear giving him control over what they regard as a weak-kneed strategy. The president is thus left free to do as he pleases in Syria, Iraq, Afghanistan, and Pakistan, totally ignoring the War Powers Resolution and, as a lame duck, ignoring Congress too.

The War Powers Resolution establishes the circumstances under which the president must consult with Congress and obtain an authorizing resolution to sustain a military operation beyond 60 days. Here are the relevant sections of the act:

SEC. 3. The President in every possible instance shall consult with Congress before introducing United States Armed Forces into hostilities or into situation where imminent involvement in hostilities is clearly indicated by the circumstances, and after every such introduction shall consult regularly with the Congress until United States Armed Forces are no longer engaged in hostilities or have been removed from such situations.

SEC. 4. (a) In the absence of a declaration of war, in any case in which United States Armed Forces are introduced–

(1) into hostilities or into situations where imminent involvement in hostilities is clearly indicated by the circumstances;

(2) into the territory, airspace or waters of a foreign nation, while equipped for combat, except for deployments which relate solely to supply, replacement, repair, or training of such forces; or

There is little doubt that President Obama violated the WPR by introducing and reintroducing US forces into "hostilities," not only in Afghanistan and Iraq but also in Syria, Libya, Yemen, and Pakistan. In Iraq and Afghanistan, nearly 2,000 U.S. service personnel have died since Obama took office in January 2009.

Unfortunately, the academic notion of shared powers is something of a myth. Only in rare instances will Congress attempt to tie the president's hands in a war situation -- for instance, when the Boland Amendment prohibited intelligence agencies from supporting the overthrow of the Nicaraguan government in the 1980s and when Congress placed a six-month limit on President Reagan's troop commitment in Lebanon in 1983. But those attempts mattered little. The Boland Amendment failed to prevent President Reagan's National Security Council from secretly funneling money to the Nicaraguan contras. And Reagan pulled US troops from Lebanon after the disastrous attack on their barracks in Beirut.

In general, Congress simply defers to the president. Even the president's most hostile critics will bend to his leadership when national security is believed (or said) to be at stake.

Republicans are more likely than Democrats to support presidential war making. Today, some of them -- for example Senator Marco Rubio (R-FL) -- are saying the president should have the authority to use "all means necessary" to defeat IS. In other words, they want to go beyond what Obama is asking under the authorization resolution. That's the same mistake Congress made in 1964, in the Tonkin Gulf Resolution, when it gave Lyndon Johnson a virtual blank check in Southeast Asia ("to take all necessary steps &ellips to promote international peace and security").

The WPR, in fact, has never been effective. No president has ever regarded it as a legitimate exercise of congressional authority in war. No president has been forced to abide by its key provision: obtain congressional approval of a troop deployment within 60 days or withdraw the troops. Only a few presidents (including Obama) have even acknowledged the resolution when planning military action abroad. All presidents have insisted that as commander-in-chief they have all the constitutional authority they need to make war. Thus, when Congress votes to authorize military action abroad, what it is really doing is legitimizing what the President has already decided to do -- and would do even in the absence of Congressional authorization.

So the only difference between then and now is that Congress won't bother to vote, or even debate, presidential war powers. Senator Kaine is apparently going to try again with his resolution. But even if his or Representative Schiff's proposal were to pass, the president would not be prohibited from many forms of military intervention, all of which he is employing today: using "advisers," CIA operatives, and special forces; transferring arms to friendly forces; conducting drone strikes; directing air strikes by non-US air forces; training other militaries; and supporting third countries or groups whose ground forces substitute for US forces that Congress would prohibit. Congress will thus be bypassed once again. And only a few members of Congress will likely speak out against the potential human and monetary costs associated with the Pentagon's latest basing plan. Indeed, most members of Congress, not to mention most of the presidential candidates, will push for increased use of force abroad. Endless war, both undeclared and undebated, will thus remain a central feature of the next presidency.

Mel Gurtov is professor emeritus of political science at Portland State University, and editor-in-chief of Asian Perspective. His most recent book is Will This Be China’s Century? A Skeptic’s View (Lynne Rienner, 2013).