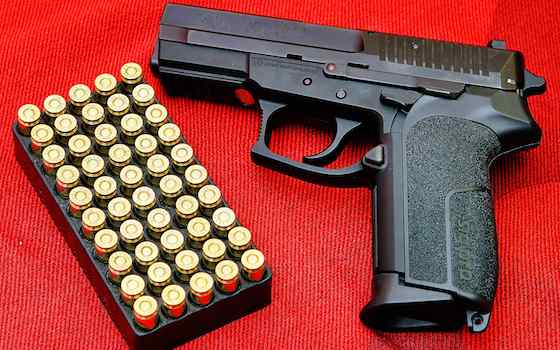 Problem is, it's 25 miles to the nearest range, where they charge an hour. What's a gun enthusiast to do?

Lucky for him, Varrieur lives in . Problem solved. Just erect a makeshift range in the back yard and fire away. It's perfectly legal.

Re-read that if you want. It's just as nutty the second time around.

In a story by my colleague that appeared in the , we learn that Varrieur, who lives on , once complained to a gun-shop owner about what a pain it was going to the range to shoot. The owner put him onto statute 790.15, which lists the conditions under which one may not legally discharge a firearm in the state. Turns out there aren't many. You may not shoot "in any public place or on the right-of-way of any paved public road, highway or street," over any road, highway or occupied premises, or "recklessly or negligently" at your own home.

There are no mandatory safety requirements. Indeed, the language about recklessness and negligence was only added in 2011. Prior to that, apparently, it was even legal to blast at shadows and hallucinations, assuming you did so in your own back yard. Shooting actual people is presumably still illegal, though the family of the late might beg to differ.

Because he is a responsible gun owner, Varrieur, who has been shooting in his back yard once a week for a month, took precautions, even though, again, he is not required to. They include a wooden backstop seven feet high, eight feet wide and a foot thick.

For what it's worth, even Varrieur thinks the law is too "loose" and would like to see safety precautions mandated. County Commissioner , also a gun owner, says the law is "a little scary."

They call the "gunshine state." But this madness is not -centric. In , you can have a gun in class. In , you can take one to the bar. In , they're trying to make it legal to take one to church. So this isn't just . It's America. We live in states of insanity.

As it happens, I have been corresponding with a reader who wrote me with what I regarded as promising ideas for moving the gun-rights argument forward. They included mandatory gun-safety training and mandatory liability insurance.

The dialogue faltered on his contention that he needs his gun because crime is spiraling out of control, and the country is not as safe as it was 20 years ago.

My reader was impressed with none of this. "Forget stats," he said, "talk to victims." If I did, I'd learn that road rage and knockout incidents are way up and that nightly, there are home invasions, robberies, stabbings and, ahem, shootings.

His insistence on perception over fact is emblematic of the nation we've become, so terrified by local TV news and its overreportage of street crime that we think every shadow has eyes and we need guns in school, the bar, the movies, church.

Until some of us get over this media-driven paranoia, even promising ideas for ending the guns impasse are doomed. So I will close with some words of advice to anyone thinking of visiting or living in or any other state of American insanity. One word, actually: