The States Benefiting the Most From NAFTA 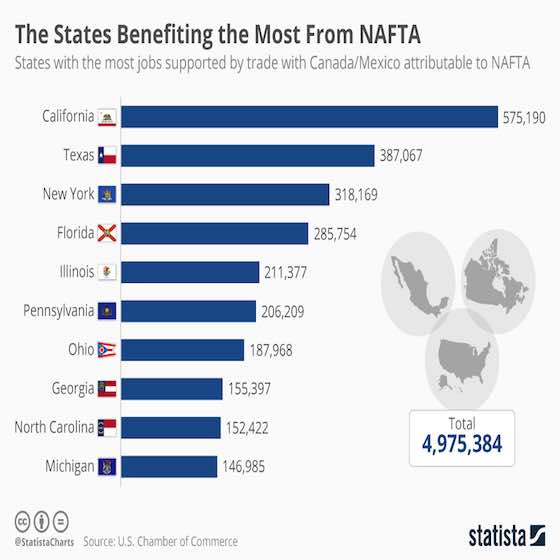 The States Benefiting the Most From NAFTA

This chart shows the U.S. states with the most jobs supported by trade with Canada/Mexico attributable to NAFTA.

With the future of the North American Free Trade Agreement (NAFTA) still hanging in the balance as negotiations between Canada, Mexico and the United States reached an apparent impasse recently, a number of high-profile figures, bodies and industries have been voicing their support for the agreement, and their concern should it ultimately be thrown out.

President Trump has been an outspoken opponent of NAFTA, once branding it "the worst trade deal maybe ever signed anywhere, but certainly ever signed in this country". While the president's negotiators are clearly going to be pressing hard for better conditions for the United States, the current deal hasn't exactly been terrible for American jobs since its 1994 inception.

As figures from the U.S. Chamber of Commerce show, there are an estimated total of almost 5 million jobs in the country which are supported by trade with Canada and Mexico attributable to NAFTA. The states benefiting the most are California, Texas and New York.

The States Benefiting the Most From NAFTA - United States Current Events