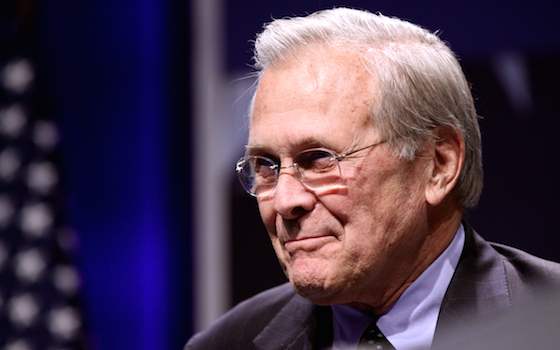 When began 30 hours of interviews with , Defense Secretary, he hoped to learn why America went to war in in 2003. And if that was not possible, he could still gain some insight into the thought processes of the top officials in the Pentagon and the as they embarked on their journey to .

Rumsfeld is one of the most fascinating figures to climb the career ladder. Blessed with an agile mind, he could always be relied on to provide good copy for reporters, yet it was never quite clear who he was or what he was doing leading the invasion of . He was not a Neo-Conservative with an ideological commitment to progress by force of arms, nor was he naive about the dangers of military intervention.

This was a man who had served as Defense Secretary under . He had sat in the Oval Office as the last helicopter took off from the roof of the US Embassy in . He understood the cost of military failure.

No great expert, he had, in the course of a 1980s tour when he met , acquired a healthy distrust of the siren calls for the US to send in troops to solve regional problems. Describing the region as a 'swamp', Rumsfeld advised current and future US Governments to reduce military engagement, since getting troops out was harder than sending them in. The only lasting things in this region, he wrote, were 'conflict, blackmail and killing'.

Morris believed he would find the answer to his question in the memos Rumsfeld wrote during his long career as congressman, insider under and then as Defense Secretary for Ford and Bush. He dictated no fewer than 20,000 of these while working for Bush. Staff referred to them as 'snowflakes'.

They were written in the bureaucrat-philosopher style made famous in his press conferences when Rumsfeld would bat away questions with musings about 'known unknowns'.

The resulting documentary, "The Unknown Known is part of a trilogy which began with the prize-winning Fog of War, where , Defense Secretary during the war, came close to describing the firebombing of in 1945 as a war crime. It continued with Standard Operating Procedure, an investigation into the casual abuse of Iraqi prisoners by the US military in Abu Ghraib prison.

There is no McNamara moment in the Rumsfeld interviews. His carapace of smiling self-assurance remains intact throughout the movie. Unlike McNamara, who tried to get out of the interview at the last minute but in the end willingly unburdened himself about the sins of America's past wars, Rumsfeld is unfailingly courteous, but never lets down his guard.

When Morris catches him out in a blatant untruth -- that investigators found no evidence that Guantanamo techniques of enhanced interrogation (or torture) influenced the behaviour of the guards at Abu Ghraib -- Rumsfeld smiles and says 'that's a fair assessment' and moves on, as if none of this concerns him.

He rarely gives a straight answer, often relying on semantics to cloud the issue. He seems strangely disconnected from events. The man who said 'stuff happens' when was collapsing in to chaos has elevated the use of the passive to an art form.

Nowhere does he take responsibility for any event or decision. Yet he, with his former colleague, Vice-President , ruled supreme, with the sidelined.

In one of the most revealing memos, from , he muses on 29 things that could go wrong with the looming war: the allies would refuse to join in; no weapons of mass destruction would be found; would split in to two or three parts, to the advantage of ; instead of lasting two to four years, the war would drag on for 10; in place of the promised democracy, would be torn by ethnic strife. Full marks to Rumsfeld for clear thinking there.

At around the same time, however, he was bellowing at journalists who dared to question the justification for war: 'We know they have weapons of mass destruction.'

But there is another, very Rumsfeldian aspect to this memo. It concludes by saying that an equally persuasive list could be drawn up of reasons why failure to remove would lead to catastrophe. Morris is sure that such a memo exists. So what does Rumsfeld believe? Every conceivable possibility is covered in these memos. Rumsfeld says he liked to keep his staff informed of his thinking. Clearly he was also cowing his rivals with his intellectual superiority.

Morris likes to develop some empathy with his subjects. This did not happen with Rumsfeld. Morris neither trips him up, nor gets him to bare his heart. This, Morris believes, is the key to his character. 'He is impervious to criticism. I would go further. He is blind to the world around him, and to history.'

His memos are an attempt to create a web of words in which knowledge and belief are hopelessly confused. The goal, Morris concludes, is to devalue evidence, and replace it with dogma.

As collapsed into chaos, he lambasted the press for putting a negative spin on 'democracy at work'. But in the end language cannot be bent to disguise the truth.

Rumsfeld is not happy with the film, complaining that there is too much emphasis on Abu Ghraib and that his departure from the Pentagon is made to look like him sneaking out of the back door in disgrace.

No doubt Rumsfeld believes that he saved America, not once but twice. The first time, as Defense Secretary under Ford, when he bludgeoned into raising Defense spending at a time of detente, thus providing the platform for Reagan to bankrupt the with his arms race. And then after 9/11 when he created a more mobile army suited to fighting a global war on terror, not Soviet tanks in . Finally, he believes that inability to close the proves the Bush administration was right.

For Morris, he is a man who attempts profundity, but does not achieve it. For those who have tried to get their heads around the parlour game of the four combinations of 'known' and 'unknown' and failed, there is a reassuring moment. It emerges that Rumsfeld has two contradictory definitions. So he doesn't understand it either.