The Good and the Bad of North America Summit | United States

The Good and the Bad of North America Summit 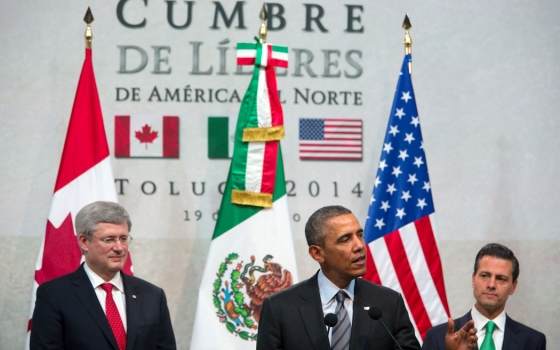 The summit of President with his counterparts from and was a missed opportunity to relaunch the 20-year-old free trade agreement among the three countries, but it produced a little-noticed plan that may have a big impact on economic and cultural integration in coming years.

While much of the media coverage of Wednesday's summit in , focused on the presidents' agreements on energy and security issues, their most important talks may have centered on a dramatic increase of academic and student exchanges, as well as joint scientific research and innovation centers.

According to senior Mexican officials, at a U.S.- meeting during the summit, Mexican President showed Obama a poster with a graphic explanation of a new Mexican plan to increase the number of Mexican students in U.S. colleges from the current 13,800 to 100,000 by 2018.

The plan is geared at turning into the second or third source of foreign college students in , after and , says a background paper titled "Proyecta 100,000: Toward a Knowledge Economy."

But if study-abroad plan is carried out as planned, it will be one of the most ambitious ones of its kind. Obama's "100,000 strong in the Americas" calls for increasing the number of U.S. students in all Latin American countries to 100,000 by 2020. has launched a "Science without borders" plan aimed at sending 100,000 Brazilian graduates to pursue advanced degrees mainly in science and engineering all over the world, and has its own study-abroad program aimed at sending 6,000 students abroad annually.

Student mobility, especially that of foreign students to U.S. colleges, is considered a key issue in today's race for competitiveness, because all major world university rankings agree that U.S. universities continue to be by far the best in the world. They produce the bulk of scientific research and patents within the world's academic community.

Mexican officials say they plan to pay for the massive increase in student exchanges with public and private funds. has already earmarked an increase in funds for education exchanges this year, and the government will now ask Mexican and U.S. companies to contribute their share, as they will be the first to benefit from highly skilled scientists, engineers and technicians, officials say.

Sources close to the Obama-Pena Nieto meeting told me that, during the bilateral meeting, the Mexican president cited several areas in which the U.S. government could help speed up the student flow, including easing the U.S. visa paperwork and cost requirements for Mexican students. In coming months, will also ask several U.S. states to offer in-state tuition to Mexican students, in exchange for the same treatment to U.S. students in Mexican universities.

Also, to encourage an increase of U.S. students going to Mexican universities - there are now fewer U.S. students in than in , and - has asked the Obama administration to change the travel advisories to make it clear that many areas of are violence-free, Mexican officials say.

My opinion: It's a real pity that Obama, and Prime Minister didn't use the occasion of the 20th anniversary of the three countries' North American Free Trade Agreement to relaunch the trade bloc.

They could have, for instance, announced plans to lift all remaining trade and services barriers across the board, to make multinational companies' supply chains more efficient, and compete more effectively with . The Obama administration, however, has decided to focus its energies on creating the , a much wider economic bloc that will include much of , as well as , , and .

But if carries out its massive student mobility program to U.S. universities over the next four years, it may mark the beginning of a cultural phenomenon that could have a big impact on U.S.- ties, and set the stage for a much more integrated North American community.

"The Good and the Bad of North America Summit "