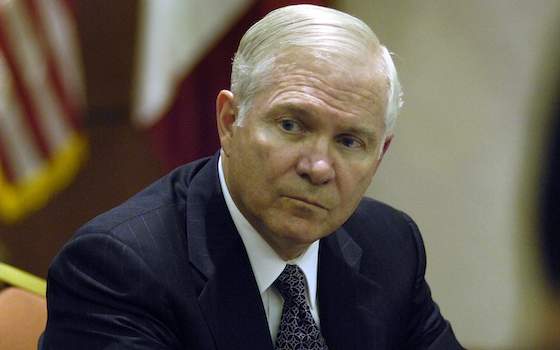 Former Secretary of Defense , in discussing his new book (Duty: Memoirs of a Secretary at War)

, has had a lot negative to say about how President Obama and his national security team operated during his own involvement with them. But after having served under several other presidents of both parties, he made another more sweeping observation that warrants sober reflection.

On "Meet the Press" recently, host reminded Gates that in 2011 he had quoted the late Gen. saying: "In my opinion, any future defense secretary who advises the president to again send a big American land army into , into the or should have his head examined."

Gregory asked: "Does that mean to say that you think and will be never truly won, will never be seen as victory?" Gates replied: "If you look back at the Korean War, there are very few instances where we have been engaged in a major military conflict, where we have come out with what we saw as a victory, as clear-cut as in World War or in the first Gulf War in 1991."

He went on: "Whether it was Korea or or or , there was not a conclusion to these conflicts that ended in a victory parade...As I often said as secretary of defense, in the last 40 years our record in predicting where we would use military force next, even six months out, is perfect. We've never once gotten it right.

"From under to to to the Balkans, after twice, , twice, you name it. We didn't know six months ahead we would be in those places in those kinds of conflicts," Gates said.

In that litany, however, he seems to have misspoken in including the second war in . Unless memory fails, his previous boss, , began beating the drums for invading that country as early as April of 2002. It was then that legal expert told a committee that Bush could take military action without asking under the theory of "the unitary executive, "especially in wartime.

Even the successful first Gulf War launched by the senior , which Gates cited as a clear-cut victory in reversing conquest of , underwent a later do-over by the junior Bush on grounds that proved to be woefully fallacious.

Of all the wars involving listed by Gates over the last 40 years, none has provided more basis for contemplating the cost in American lives and treasure than has the junior Bush's 2003 invasion of . His war of choice still goes on in reduced intensity. The insurgent reappearance in the Anwar province towns of and is the latest cause of more heartache for American families of the fallen there, revisiting their personal losses.

But Gates could offer plenty of other evidence elsewhere to argue that presidents and their national security advisers have been much too quick over the last four decades to plunge into foreign military adventures, or misadventures, without sufficient contemplation of an end game short of victory.

Of all the American interventions in that time, a case can be made that only the original U.S. intervention in , in retaliation against the then-host regime that had harbored the perpetrators of the 911 attacks, was truly warranted and imperative.

Gates, in his book tour of the major television interview shows, talked about nightly sessions at his writing desk, penning letters of condolence letters to the families of the American fallen. Small wonder he is so reflective of America's war history that has followed the Cold War.

For all the criticism in his latest book of Obama and his national security advisers, Gates made a point of saying he ultimately agreed with the major foreign policy decisions made. At the core of that Obama policy is a desire to reduce American military engagements abroad, which have extracted such a painful human cost on the troops and their families over the last four decades, with so little recompense .