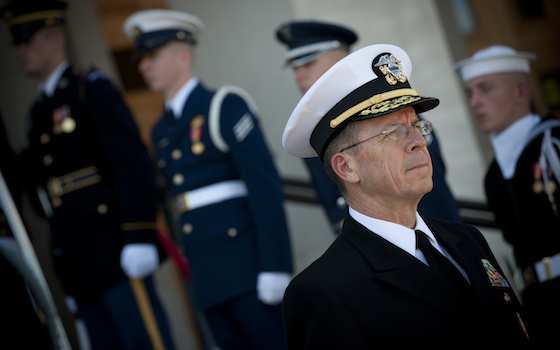 How do you recognize a military veteran? Really see them, once they're out of military fatigues. No boots and camouflage. After the homecoming is over, with its flags and patriotic speeches and TV cameras and families weeping in relief.

How do you get the public to commit, beyond patriotic lip service, to help veterans get on with their lives? How can you get Americans to understand what vets go through when so many of us were detached from the wars that have been fought for nearly 13 years? There is a chasm between those who have served and the rest of us, the consequence of an all-volunteer military.

Returning veterans are invisible to many of us because, in large part, they weren't in our consciousness to begin with.

One thousand members of the military are returning home each day to America. Only 100 are hired each day.

This dispiriting math troubles Adm. , the retired chairman of the Joint Chiefs of Staff, as does the estimate that 22 veterans commit suicide daily. These figures are among the many grim facts he readily recites.

Mullen just might be the nation's strongest liaison between the military and the rest of us. Someone needs to be. The unemployment rate of veterans who served after 9/11 hovers around 10 percent. That's higher than the general unemployment rate when adjustments are made for age and other demographic characteristics.

In a recent speech before the , Mullen laid out the challenges facing the military today: unemployment and the mental health struggles of many returning soldiers, and the dual task of downsizing the armed forces amid the national debt crisis while maintaining the military capabilities the U.S. will continue to need in a dangerous world.

Mullen was chairman of the Joint Chiefs of Staff between 2007 and 2011. He served under both and . He led during the troop surge in , through differing strategies in and at the critical point when U.S. Navy Seals took out . His global insights are expansive. His cadence is that of a seasoned commander; clipped and to the point.

More citizens should hear him. So here goes:

"The American people did not have to buy into these wars," Mullen said. Unlike previous wars when a draft was in place, the attitude among civilians was "people go off and fight our dirty little wars, and let us get on with our lives."

He's right, of course. A nation at war should have felt more like a nation at war, with each one of us consciously sacrificing something. But there was never a deep commitment or the feeling that every American had something at stake.

No wonder so few of us really embrace returning soldiers now, of whom many have made multiple deployments. Mullen described these troops as "the most combat-hardened force in our military."

In contrast to those who served in previous wars, 50 percent are married and return to what they wish will be dual-income families. He said they are disciplined, loyal and have the unique ability to make decisions amid ambiguity. He's also fond of pointing out that this generation of military personnel is "wired to serve," adept at technology and all it can offer a workplace.

Business leaders, he argued, need to offer these returning soldiers a career, not just a job. Former soldiers may need transitional help to understand an organization, but then employers can just let them get to work.

Soldiers, Mullen allowed, also need to take initiative, to resist the temptation to socialize mainly among other military. "People don't know who we are."

Mullen now serves on the boards of and , so he's able to see veterans through the eyes of a business leader.

"Believe me, the military is tired of war," he said. "That doesn't mean we are tired."