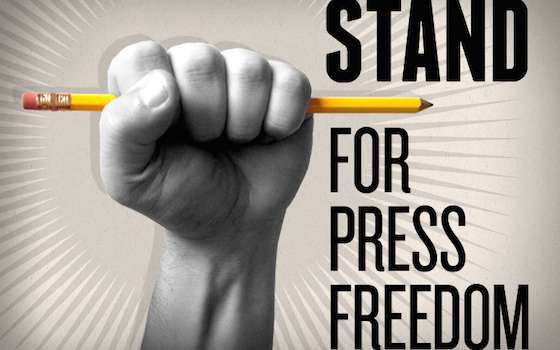 The Pulitzer Prizes to two news outlets that cooperated with whistleblower in the disclosure of widespread surveillance of electronic communications at home and abroad has U.S. officialdom in a dither.

With the exiled Snowden harbored in and widely branded at home as a traitor for leaking the voluminous evidence to reporters working for The and the U.S. arm of Guardian newspaper, the Pulitzer committee came down squarely on the side of freedom of the press.

Not surprisingly, Snowden called the awards "a vindication for everyone who believes that the public has a role in government." He hailed his collaborators, chiefly writing for the Post and for the Guardian website, for reporting the scope of the government spying "in the face of extraordinary intimidation," presumably by government officials.

The public-service awards to the two news outlets came amid continuing clamor from some government sources for the arrest, extradition and prosecution of Snowden, ignored to date by . Rep. of , chairman of the , told the Post the Pulitzer decision was "disgraceful," and instead the recipients should be prosecuted for disclosing classified information.

But the Pulitzer committee, comprised of leading American newspaper editors and officials, once again took an emphatic position in the cause of the public's right to know what its officialdom is doing in secret in its name. Gellman said his team "consulted with the responsible officials on every story and held back operational details. But we were not prepared to withhold the secret policy decision the government is making for us and surveillance it's directing against us."

The awards marked the second major instance of the Pulitzer public-service citations going to newspapers for disclosure of critical classified materials in the national security field. In 1972, the and the Post shared the award for printing the famed Pentagon Papers describing the government's secret history of its involvement in the Vietnam War.

This year's prizes came on the heels of newspapers' disclosure last week of details from a yet-to-be released report by the , chaired by Sen. of , sharply critical of the CIA's use of waterboarding and other extreme interrogation methods against major al-Qaida detainees.

The committee concluded, according to , that "the CIA repeatedly provided inaccurate information to the , impeding a proper legal analysis of the CIA's Detention and Interrogation Program." It also found that the CIA impeded congressional oversight and that of its own inspector general. It said the CIA also understated how many times two detainees, both close aides , had undergone waterboarding, judged by human rights groups to constitute torture.

Feinstein's only comment on the disclosures was a straight-faced observation, "If someone distributed any part of this classified report they broke the law and should be prosecuted."

Her committee earlier this month moved by an 11-3 vote to send its report to the executive branch for declassification review. If and when it is declassified and released, it seems certain to trigger another round of public debate on the NSA and CIA secret practices in this burgeoning surveillance scandal.

It is likely as well to resurrect the whole argument about whether waterboarding and other methods of extreme interrogation actually produce information from detainees not obtainable by other methods acceptable under the .

In any event, the Pulitzer Prizes in this whole area of national security, while holding no authority in the arena of legality, constitute a resounding statement of approval from the journalism community of its own continuing pursuit of accountability from government on critical matters of public policy.

Whatever personal fate turns out to be -- and whatever the consequences to those who reported them -- the public interest has been served by the expert coverage of the startling episode.