On the 9/11 Memorial and Museum 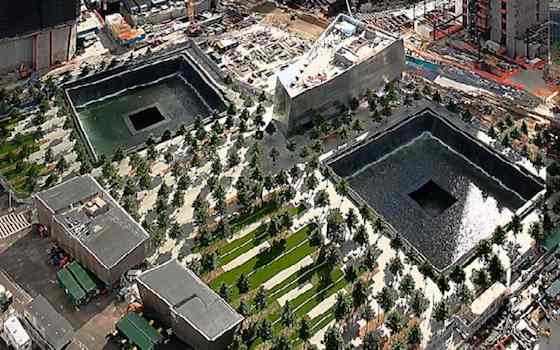 On the 9/11 Memorial and Museum

The new memorial and museum commemorating the worst attack on the continental in history stands starkly as remembrance of that morning in lower nearly 13 years ago when terrorism rained down on the from those two hijacked jetliners.

The complex at Ground Zero of that enormous tragedy recalls and honors the 3,000 Americans and others who perished, as well as the service of the thousands of selfless firefighters, police and other first responders who valiantly raced to rescue them at peril to their own lives.

Along with the new skyscraper, popularly known as the , the complex is not far from the Statue of Liberty. From her small island in , still welcomes "huddled masses yearning to breathe free" who come to American shores, though more often now through other portals.

The public was admitted to the National recently after an earlier private preview for survivors, relatives of 9/11 victims and first responders. It displays various artifacts and accounts of the grisly event, and the opening was not without some controversy over a closed VIP reception attended by former Mayor and other luminaries.

Complaints also were voiced over a gift shop in the museum's bookstore, where trinkets such as miniature firefighters and commemorative scarves can be purchased. Protesters said it trivializes the memorial, although other national memorials have similar gift shops.

One is at in -- the site of the sunken battleship USS Arizona, sent to a watery grave by Japanese pilots on , the other date that, as FDR put it, "will live in infamy." Both were sneak attacks, but was carried out as a military exercise against a military target, whereas 9/11 was pure terrorism against everyday civilian workers, and arguably more heinous.

In any event, commercialism at Ground Zero was a phenomenon from the start. For months after the towers fell, street venders hawked cheap souvenirs on every corner as tourists waded through ankle-deep ash and other debris.

, now the tallest building in the Western Hemisphere, is an architectural marvel. But it also stands as a permanent reminder of perhaps American intelligence's greatest failure, not having rooted out the terrorist pilots who hijacked the jets and used them as deadly missiles.

The value of the real estate in the heart of financial district no doubt encouraged building another revenue-earning skyscraper there. Also, some may see the new one as an act of national defiance to those who might contemplate a second 9/11 obscenity.

Nevertheless, in the months after the attacks, an ideal way to honor the victims had already been conceived. Each night, two beams of light from where the once stood pierced the heavens over skyline. It was an arresting and haunting commemoration completely devoid of any commercial intent.

Most national memorials and museums celebrate the life of a national leader of great achievement -- , Jefferson, Lincoln, King. Others mark great military victories, like World War II, or commemorate the sacrifice more than the ambiguous result, as in the Korean and Vietnam War memorials.

This latest memorial complex is a tribute to heroic sacrifice in one of America's darkest hours, but it also is a permanent reminder of national vulnerability in a new world in which the vast oceans that long guarded America no longer ensure security.

There seems a certain irony, even as we honor all those who lost their lives, that in the process we inevitably memorialize that horrible event as well. What counts now, however, is what the survivors of and the families of those who did not survive feel about this latest memorial. Many of them flocked to it on the weekend just passed, and many more will do so this summer and in the years to come.