On Race: Meet Dumb and Dumberer 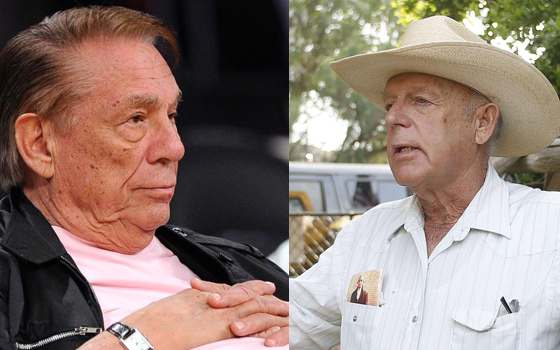 On Race: Meet Dumb and Dumberer

Oh, my Lord, where to begin?

You already know what this column is about. You know even though we are barely three sentences in. You knew before you saw the headline.

There are days in the opinion business when one story makes itself inevitable and unavoidable, one story sucks up all the air in the room. This is one of those times. One story.

Well ... two, actually: the misadventures of and .

Bundy, of course, is the rancher whose refusal to pay fees to allow his cattle to graze on public land made him a cause celebre on the political right. They enthusiastically embraced his government-is-the-enemy ideology ( would be proud) and militia types flocked to his side, eager for an armed standoff.

Until the press conference where Bundy relieved himself of a few opinions regarding -- ahem -- "the Negro."

And again: where to begin? Black people "put" their sons in jail? Slavery promoted family life? And beg pardon, but what is free usage of federal land if not a government subsidy? There is so much stupid packed into those words you'd need a chisel to get it all out.

Small wonder that the extreme right treated its hero as the rats treated Titanic, shocked -- simply shocked! -- to learn that a guy who leads an army in refusing to recognize the existence of the federal government might be nuts.

Which brings us to Sterling, owner of the team the . A leaked audiotape has Sterling telling a woman friend to stop publicizing her relationships with African-American people and bringing them to his games. Sterling also says of players: "I support them and give them food, and clothes, and cars and houses. Who gives it to them?"

"Give." Mind you, the man is talking about people who work for him.

So there you have it: frick and frack, the dumb and dumberer of American racial discourse, and predictably, dutifully, media figures, pundits and pols have come together to blow raspberries in their direction, to say all the right things in condemnation of them and their diarrhetic mouths. And yes, they deserve that. Still, there is something facile and dishonest in it, something that reeks of unearned righteousness and even moral cowardice.

The truth is, the idiocy of these men doesn't mean a whole lot, doesn't impact much beyond their immediate lives. We hyperventilate about it, yet somehow manage not to be overly concerned as black boys are funneled into prison, brown ones are required to show their papers, voting rights are interdicted, Fourth Amendment rights are abrogated and some guy has his job application round-filed when the hiring woman sees that his name is Malik.

We keep declaring our country cured of its birth defect of racial hatred. Indeed, that's an article of faith on the political right.

It is only possible to think that so long as you don't look too closely, so long as you are willing to ignore dirty deeds done largely out of sight and back of mind by collective hands -- everyone guilty, so no one is. Then some guys who didn't get the memo speak a little too stupidly a little too loudly and people condemn them and feel good about themselves for doing so.

"On Race: Meet Dumb and Dumberer "