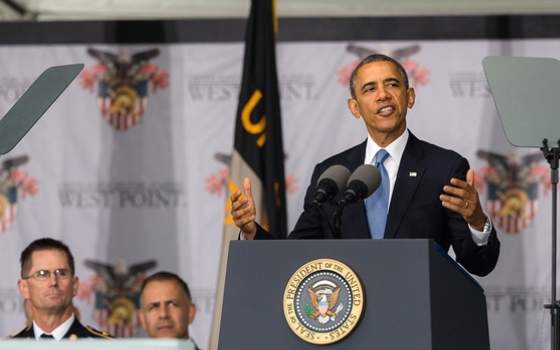 In keeping with his determination to get America off "a perpetual wartime footing" after more than a decade of combat in and , President Obama's commencement address at West Point was a sobering preview of what lies ahead for the graduates.

Before an audience of the newly minted military officers, he sought at length to make the case for a selective response to global and regional challenges. He argued that this country must make hard choices about when and where the nation's might can be exerted as the leading partner in the world community.

In what he called his "bottom line," the president said: "U.S. military action cannot be the only, or even primary, component of our leadership in every instance. Just because we have the best hammer does not mean that every problem is a nail."

It was an apt way to rebut political critics who have been disparaging what they see as evidence of weakness or indecision in coping with continuing crises around the globe. They see it particularly in Obama's dealing with the reawakened Russian bear, in the person of Vladmir Putin.

Obama's position on crisis -- that there was "no military solution" to Putin's land grab in Crimea, and presumably none to any reprise in eastern -- did not sit well with American conservatives, who view it as evidence of American power in decline. In response, the president at West Point charged that his critics were "either misreading history or engaged in partisan politics."

Obama stoutly defended his policy of choosing where to intervene amid a sea of foreign policy woes. Without naming names, he obviously had in mind the impulsive conduct of his Republican predecessor, who invaded in 2003 while America's war against the 9/11 perpetrators harbored in was unresolved.

While allowing that "in the 21st century, American isolationism is not an option," the president argued: "Since World War II, some of our most costly mistakes came not from our restraint, but from our willingness to rush into military adventures without thing through the consequences -- without building international support and legitimacy for our action, or leveling with the American people about the sacrifice required."

Before the ostensibly nonpolitical audience at West Point, Obama once again seemed to pick at the scab of war of choice based on flawed intelligence, which was left for him to deal with, at the cost of his own unfulfilled agenda

"(W)hen crises arise that stir our conscience or push the world in a more dangerous direction but do not directly threaten us -- then the threshold for military action must be higher," he said. In such circumstances, we should not go it alone," but instead resort "if just, necessary and effective, (to) multilateral military action."

In another needling of Bush, who built a transparently shallow "coalition of the willing" as a fig leaf in his war, Obama lectured, "(W)e have to work with others because collective action in these circumstances is more likely to succeed, more likely to be sustained, less likely to lead to costly mistakes."

All this enabled Obama the previous day to disclose that the U.S. troop level in will be cut to 9,800 by the end of this year. Then all combat troops are to be out, leaving only a small contingent at the American Embassy in by the end of 2016.

Already critics are charging that the timetable is being driven by politics, calculated to enable Obama to claim he "ended" both wars on his watch. Rather, they say, the timetable should be determined by realistic military needs to achieve genuine stability in and . That seems to be a reasonable assessment, considering the continuing outbreaks of violence there.

What Obama said at West Point, with the bark off, is that the U.S. must get off that "perpetual war footing" sometime if it is to get back to problems at home -- and he intends to do what he can to see that happen, within the bounds of its global responsibilities.