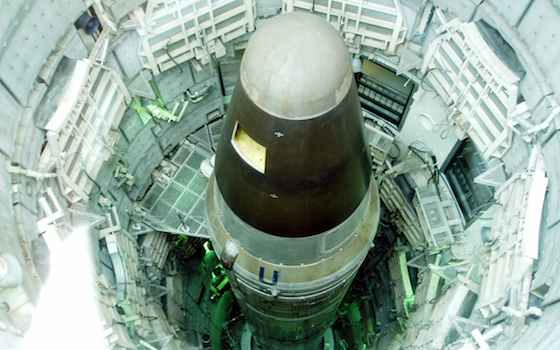 Shades of Cold War anxiety were rekindled recently by reports that investigations were underway into alleged drug use, as well as cheating on preparedness tests, among nuclear missile launch officers working in the nation's pressure-cooker underground bunkers.

Air Force Secretary told reporters that 11 officers at six such sites were suspected of illegal drug possession. According to the , 34 of them at in have had their security clearances suspended. It's alleged that some of them passed on to colleagues answers to questions gauging their knowledge of, and proficiency in, launching the 450 Minuteman III intercontinental ballistic missiles (ICBMs) aimed at various strategic targets around the globe.

The mission of the Air Force Global Command headquarters at in is a carryover from the Cold War strategy of mutual assured destruction (MAD) that governed the postures of the and after their World War II alliance against Hitler.

Early predecessors in the launch bunkers were well aware of the trigger-finger tensions of the first years thereafter, and were particularly conditioned to the role they played. Two-man teams still work in around-the-clock shifts manning twin coded switches for simultaneous firing and security.

At the same time, then as now, an undisclosed number of nuclear-tipped bombs have been kept aloft by long-range bombers under a "fail-safe" system whereby pilots can release them only on presidential order delivered by code. Movies like "Fail-Safe" and "Dr. Strangelove" familiarized millions of American viewers with the peril of the nuclear age.

But according to the , today's launch officers are mostly younger men and women of lower rank to whom the job assigned them in the post-Cold War era may seem outmoded with the end of the , and hence they may be less motivated in the work.

More than 50 years ago, as a reporter at the Pentagon, I stumbled on a several stories that created a temporary storm among the military and civilian brass. A low-level bureaucrat tasked with checking on the super-secure missile launch system told me of a series of near-accidents involving disturbed launch officers working under extreme pressure in the bunkers housing the ICBMs and the complicated firing apparatus.

In one particular episode, a military officer based at a U.S, site in , despondent over wife's threatened divorce, climbed onto a missile and announced he intended to explode it with a firearm. According to the report, the woman was summoned to the site and he was talked out of his threat.

This and other accounts I reported in my newspaper of the time were picked up elsewhere, resulting in pushback from the Pentagon, not denying the episodes but insisting that no nuclear weapon could be discharged in any such fashion. Some academic nuclear experts outside of government disagreed, but the Pentagon clung to its position in a press briefing.

Since then, numerous near-accidents and threats to nuclear safety have been reported and acknowledged, but by and large the still-present threat of a nuclear explosion has cooled in terms of public sensitivity. The issue most pointedly discussed these days is the possible acquisition of nuclear weapons by so-called rogue states like and .

In the run-up to the American invasion of in 2003, the Bush administration cited fear of the use of non-nuclear weapons of mass destruction by the Saddam Hussein regime, or having them fall into the hands of terrorist organizations. The latter peril remains, but the need for retaining at least the scope of the underground missile launch force has been questioned in many quarters at home.

Recently, Secretary of Defense visited one such site and through a spokesman expressed his concern over reports of a breakdown in discipline among the missile launch officer corps. It's all a reminder that while the tensions and nuclear stare-down with the are over, the specter of nuclear Armageddon remains, requiring continued American vigilance.