America's Most Dangerous Cities For Cyclists 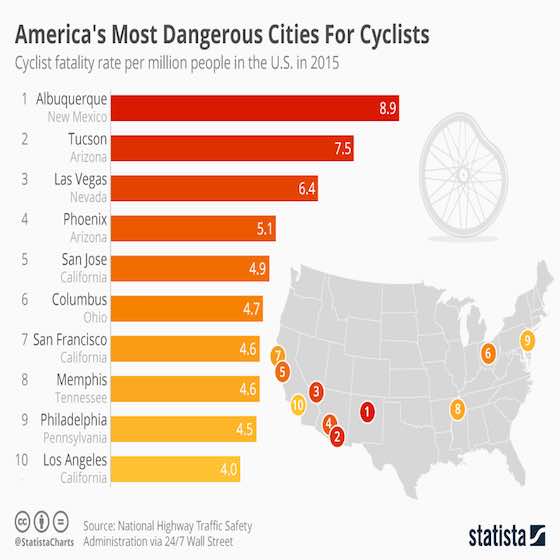 America's Most Dangerous Cities For Cyclists

This chart shows the cyclist fatality rate per million people in the United States.

When it comes to infrastructure for bikes, U.S. cities are not as well regarded as urban areas in the Netherlands or Denmark. Amsterdam and Copenhagen boast some of the best cycling infrastructure in the world and they are well-equipped with extensive bike paths, racks and parking systems. In some Dutch cities, rain sensors even give priority to two-wheeled commuters in harsh weather. Even though the story is completely different in the U.S. where streets were constructed purely with the automobile in mind, cities are actually surprisingly safe for cyclists. In 2015, cyclists accounted for only 2.5 percent of traffic deaths in the U.S. while in the Netherlands, the share was 25 percent in the same year. That is primarily due to the massive volume of Dutch people travelling by bike every day.

Despite the relative safety of American cities for cyclists, 70 percent of fatal bike accidents still occur in urban areas. National Highway Traffic Safety Administration data analyzed by website 24/7 Wall Street found that Albuquerque in New Mexico has the highest U.S. cyclist fatality rate. 2015 is the most recent year data is available and that year, there were 5 fatalities among the city's cyclists. Given that the city has a 559,121 population, that comes to 8.9 deaths per million of its inhabitants. Tucson has the second highest fatality rate at 7.5 deaths per million while Las Vegas comes third with 6.4. The safest cities include Boston, El Paso and Oklahoma City where no deaths were recorded among cyclists.