Mental Illness and Guns have Created a National Epidemic 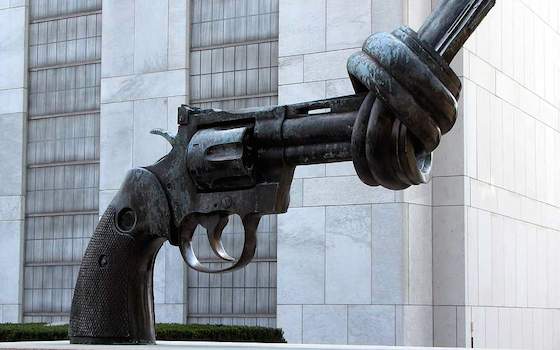 Mental Illness and Guns have Created a National Epidemic

Before day's end, 86 Americans who were alive yesterday will be dead from gun violence. One of us dies from a bullet every 17 minutes.

That statistic lends a certain futility to the anguished plea of : "Not one more!" He made this appeal after losing his only son, Chris, in the shooting rampage in .

Martinez led more than 20,000 people chanting "Not one more!" at a memorial rally, and the slogan has since become a trending Twitter hashtag.

But in the three days between his son's death and the rally, more than 250 Americans died from bullets. Let me tell you about one. , 26, died during weekend in my hometown, .

Police had been called to his family's home after Sims fired shots, although he injured nobody. After a five-hour standoff with police, Sims emerged from the house brandishing a rifle and was shot down by police.

Sims' death might appear utterly unrelated to the mass murder in , but they do possibly share a common thread: mental illness.

I say "possibly" because there's a lot we don't know about Sims. What we do know is grimly familiar. He did two tours in , and in the week prior to being shot by police, he'd sought help from the local VA for what his family says was PTSD. There wasn't bed space. He was told to wait 30 days. Treatment had been ordered for Sims through a special court set up for veterans; he'd pleaded guilty to domestic assault.

The circumstances of his death raise the question of whether suicide was a motive. An estimated 22 veterans commit suicide daily. Had the despondent Sims, a trained marksman, wanted to harm someone else, he could have done it. But he was the only one who died that Sunday.

What if, when Sims approached the VA for help, a trained counselor had asked him whether he had firearms at home? What if, based on how he answered that question, he could have qualified for immediate admission to the hospital? Would he be alive today?

What if the sheriff's deputies sent to visit , the gunman, a month before his shooting spree had asked about his access to firearms? They had been sent to check on his well-being, prompted by concerns of his mother and his therapist over videos he had posted. But in the 10-minute check, they didn't watch the videos or enter his apartment.

Would it not have made sense for the deputies to determine what kinds of guns and ammunition he had access to?

Yes, it would have. At the very least, it might have been one way to assess his susceptibility to commit deadly violence. We actually don't have good measures for predicting who will commit mass violence. That's a subject that needs to be studied more.

And yet it is the kind of reasonable inquiry that the conflates with privacy invasion, with an infringement on Second Amendment rights. Twenty years ago, the NRA began fighting to keep from funding studies about gun deaths because initial research showed that having a gun in the home is linked to increased risk of homicide. Now, 19,000 Americans kill themselves with a gun every year. That's an epidemic. But idles, fearful of an NRA backlash.

gets it. He understands that something can be done, and one of the signature moral failings of our is that it has done nothing. Out of fear.

"Where is the leadership? Where is the friggin' politicians that will stand up and say, 'We need to do this. We're gonna do something,' " Martinez pleaded to .

He's right. A few days before his son died, members of waffled on moving forward with a bill that would have made it easier for people to be hospitalized for mental health care, sometimes even against their will.

Yes, each story of a gun-related death is complicated, with its own nuances. Solutions are not simple. But the recurring storylines cannot be ignored. In massacre after massacre, a severely troubled assailant is found to have acquired his guns and ammunition legally.

Solving this problem is not simply a matter of enforcing the laws "already on the books" more rigidly. We need to look deeply, scientifically, at our current gun laws and change them. And get ready, because the NRA will fight to the end to stop us.

"Mental Illness and Guns have Created a National Epidemic "