Maya Angelou was Deeper than a Pithy Quote 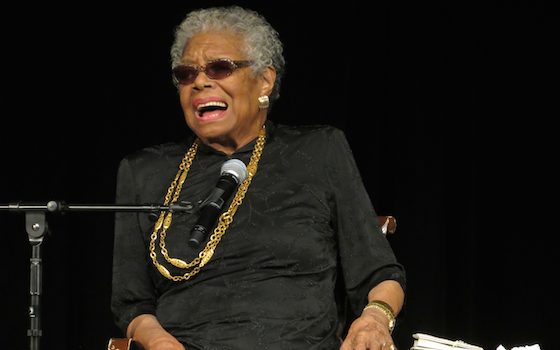 Maya Angelou was Deeper than a Pithy Quote

Since her death , at the age of 86, her verbal nuggets have been cobbled into countless lists, in places like USA Today and Oprah's website, all of them hinting, in the words of BuzzFeed's compilation, that her quotes will "make you a better person."

"When you get, give. When you learn, teach."

"Try to be a rainbow in someone's cloud."

"If you don't like something, change it. If you can't change it, change your attitude. Don't complain."

On my and Twitter feeds, a few people posted Angelou's obituary -- the account of her childhood in the segregated South; her rape as a girl; the years she spent mute; her ascension to life as a civil rights activist, singer, writer, professor, friend of presidents -- but the long obits were a social media trickle compared with the flood of short uplifting quotes:

"Love recognizes no barriers. It jumps hurdles, leaps fences, penetrates walls to arrive at its destination full of hope."

I'm a sucker for a good quote -- who isn't? -- and Angelou was a master. Even before she died, I'd gotten a lot of quote mileage from that line about people remembering how you made them feel.

But it's vaguely unsettling to see the work of this phenomenal woman reduced to self-help aphorisms, as if she were just Dr. Phil with flashy hats.

I don't say this as a expert. Frankly, I don't know her work well, so I called a couple of people who do and asked:

What are we missing when we reduce to a list of quotable quotes designed to make us "better people"?

They both said approximately the same thing.

Her work. We're missing her work. The work she created. The work it took to make it. The work of earning the wisdom she preached.

"She didn't publish her first book until she was around 40," said the poet Haki Madhubuti. He was referring to "I Know Why the Caged Bird Sings," a memoir of her early years.

"She had studied with some of the best writers in at that time, in the . She was encouraged to write, but also to read and study the literature."

He went on about the work she invested in her work.

None of that is evident in a quotable quote.

, associate professor of English at , echoed the thought.

"Her work captures what it means to be a black woman in the 20th and 21st Century and that cannot be reduced to quotes," she said. "It's complicated and nuanced."

When we reduce Angelou to her quotable quotes, Ellis said, we miss "that she was a craftsperson, an amazing storyteller."

Nevertheless, I couldn't resist asking Ellis if she had a favorite quote. What she had instead was the opening paragraph to "I Know Why the Caged Bird Sings."

She read it aloud:

"When I was three and Bailey four, we had arrived in the musty little town, wearing tags on our wrists which instructed -- 'To Whom It May Concern' -- that we were , from , en route to c/o Mrs. ."

That's not a quotable quote. It's an artful invitation to continue reading a story that is deeper than a quote.

Death is an occasion to get to know someone better. The publicity surrounding Angelou's death has provided a lot of people with the occasion to look more closely at her life and her writing.

Her writing includes some good quotes, and the quotes may be part of the reason many people are looking beyond them.

As of , "I Know Why the Caged Bird Sings" was No. 1 on Amazon's best-seller list.

It's a story that shows that Angelou didn't just preach the virtues of courage, resilience and forgiveness. She learned them.

"Maya Angelou was Deeper than a Pithy Quote "