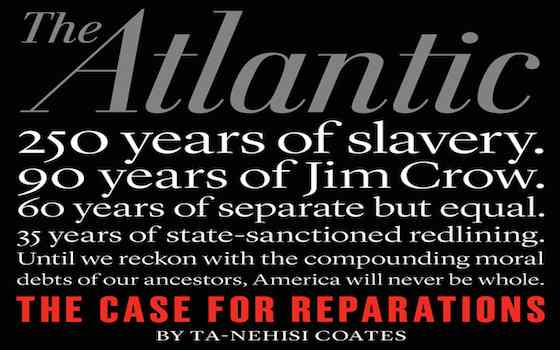 "Have you heard of Irish amnesia?," a jolly Irish-American friend once joked. "It's when you forget everything but the grudges."

Indeed, I responded, a lot of us black folks can identify with that: We forget everything but our "40 acres and a mule."

That, in case you haven't heard, is the legendary promise that was made to freed slaves but seldom carried out beyond some truncated efforts by Major General William Tecumseh Sherman and the Freedmen's Bureau.

A century and a half after the Civil War, talk of slavery reparations has faded. Since the original victims and perpetrators of what antebellum southerners politely called "peculiar institution" have long since passed away, even die-hard activists sharply disagree on actual damages or possible remedies.

Yet The Atlantic's Ta-Nehisi Coates has revived that conversation with a new angle. In "The Case for Reparations," a provocative 18-page cover story in the magazine's June issue, the senior editor and blogger focuses less on slavery than on its legacy, particularly the trickery and policy choices that systematically denied equal protections and opportunities to descendants of slavery.

After Ku Klux Klan terrorism, political disenfranchisement and segregation as Reconstruction collapsed in the 1870s, he recounts, along came widespread exclusion from labor unions and denial of health, education, welfare and benefits, even by progressive New Deal.

Later came low-interest FHA and home loan benefits that helped veterans build America's post-World War II middle class but were largely denied to black veterans as government policy reflected and even promoted restrictive "housing covenants," a since-outlawed clause in the deed that limits the sale of the property to white Christians.

In fact, the practice of "redlining" black neighborhoods out of conventional mortgage and insurance benefits began with federal policy, recounts, "selectively granting loans and insisting that any property it insured be covered by a restrictive covenant."

How well I know. As a young reporter in the 1970s, I covered the consequences of those racially biased policies in such impoverished communities as . There profiles residents who organized against mortgage redlining and unscrupulous home-sale contracts as the gap between black and white home ownership and wealth accumulation widened.

statistics and personal stories offer a spirited rebuttal to those who use the "My family didn't own any slaves" argument to claim racial innocence. A brisk tailwind of white privilege endured in American society long past the Civil War, whether its beneficiaries notice it or not.

But what is to be done? Here robust case for reparations turns squishy with a strikingly modest plea. He endorses a bill that Rep. , a Democrat, has repeatedly introduced for 25 years to study the issue and offer "appropriate remedies."

Having watched Conyers' bill repeatedly fail to make it even to the House floor for debate, I don't expect it to have better chances in the foreseeable future.

As a result, I finished essay more committed than ever to my long-held view that the first step toward repair of the damage left by slavery is to stop calling it "reparations." The word that does less these days to rally black support than to enflame white opposition.

knows. Although President Affordable Care Act makes no mention of race, the right-wing talk show star denounced it in early 2010 not only as redistribution from rich to poor but also as "a civil rights bill... reparations, whatever you want to call it." Whatever. I call it playing the race card.

Such talk helped set the stage for a later revolt by 26 states, largely controlled by Republicans, that refused to participate in the health plan's expansion of , the medical insurance program for the poor. That refusal, a analysis has found, left more than half of the nation's uninsured low-wage workers -- including two-thirds of its low-wage uninsured single mothers and African Americans -- uninsured.

The uninsured include hundreds of thousands of cooks, cashiers and nurses' aides. It is no wonder that talk of slavery reparations has faded. Support for low-income workers of all races needs repair right now.