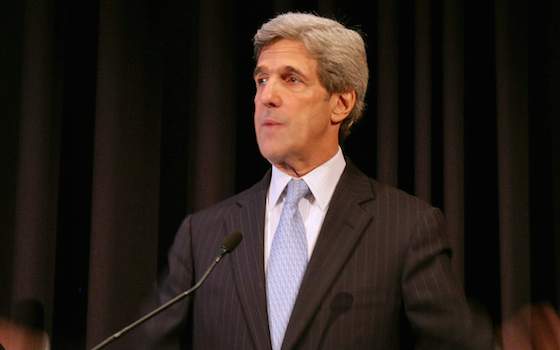 As secretary of state, has left no doubt that he is ready, willing and able to go anywhere and do anything to make headway in his unenviable pursuit of progress in international stalemates.

His perseverance in seeking to salvage the decades-long Israeli-Palestinian peace quest, and to deter development of nuclear weapons, use of chemical weapons, and most recently land-grab in , has made him a veritable diplomatic whirling dervish.

His diligence and patience, however, have not yet been matched by success in his 15 months in the Obama administration's highest-profile cabinet post. He functions amid a growing public sense that the president is relying too much on diplomacy and not enough on military muscle to achieve the nation's foreign policy objectives. Indeed, the word "weakness" is regularly bruited about.

In a speech on Class Day at , his alma mater, Kerry went back to a theme he first struck 48 years ago in his own Class Day oration during the Vietnam War, in which he subsequently served in the .

He argued, "We cannot allow a hangover from the excessive interventionism of the last decade to lead now to an excess of isolationism in this decade." He added that "most of the world doesn't lie awake at night worrying about America's presence -- they worry about what would happen in our absence."

Those remarks seemed appropriate in reference to the previous Republican administration's intervention in , which was a costly diversion from the war against the 9/11 terrorists harbored in and has left continuing armed civil strife in both countries.

In an interview with the before his Class Day speech, Kerry said "we've gone from an excess of interventionism probably to an excess of isolationism, an instinct to want to button up in this global world and ... not necessarily exercise our leadership. I don't think we can afford to do that."

Kerry, the Globe reported, made clear he wasn't criticizing Obama but was noting the drag of budget cuts on foreign policy engagement. "I just think we're not as quick to pick up the baton as we were, perhaps, back then," he told the Globe. "There's a lot of cynicism around, a lot of debate about what can be achieved. ... I think if there's one dominant feature that sort of characterizes the American political process right now, and even global challenges, it's frustration."

Still, Kerry soldiers on along the diplomatic track as Obama seeks to pivot American foreign policy away from what he has called a "perpetual wartime footing," in which so much of the federal budget continues bankroll foreign wars. In his speech Kerry also took note of public weariness toward stalemate and indecision of all government institutions.

"The problem is," he said, "today's institutions are simply not keeping up or even catching up with the felt needs of our times. Right before our eyes, difficult choices are deferred or avoided altogether. ... And the sum total of this inaction is stealing the future for all of us. ... These and other felt needs will never be addressed if you, we, fall victim to the slow suffocation of conventional wisdom."

In all, Kerry's comments were a plea for the same kind of dogged pursuit of frustrating objectives that has marked his brief tenure as secretary of state. He has managed to cope with the challenge so far in apparent total harmony with what the president last month defined as "the guiding principle" of his foreign policy.

Obama put it this way then: "Keep our military in reserve for where we absolutely need it ... where we can make a difference, using all tools we've got in the toolkit."

In that toolkit that prominently includes the hammer of military might, continues to employ the velvet glove of diplomacy, and the frustration that so often accompanies it, as the preferable alternative to the mailed fist.