Turmoil and Intimations of Gender Bias at The Gray Lady 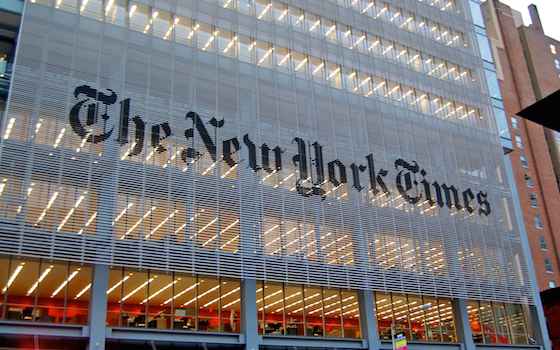 Turmoil and Intimations of Gender Bias at The Gray Lady

The print journalism world has been shaken by the firing in no uncertain terms of , the first female executive editor of the . The reaction has created as much buzz within the newspaper craft as the resignation little more than a year ago of Pope Benedict XVI.

The Good Gray Lady -- the paper, not Abramson -- is not a comparable celestial authority in the realm of print, but it does generally reign as the globe's greatest daily newspaper. Accordingly, its top editor automatically becomes, if not a celebrity in the show-business sense, a subject for scrutiny, especially when a career crash occurs.

That phenomenon has been particularly true regarding the Times, where three times in relatively recent years the top editor has been deposed or shunted aside, under one cloud or another.

In 2003, executive Howell Raines was toppled amid the debris of the plagiarism and fictional reporting of one , summarily fired when his abuses were revealed. Raines' successor, , left the paper earlier this year after a stint as a Times columnist, a soft landing pad following an unspectacular editorship.

Abramson's dismissal has become, if you'll pardon the expression, a cause célèbre because it has bred charges of gender discrimination by the Times. Her allegedly acerbic managerial style and personal clashes with publisher were said to have hastened her fate. Sulzberger has denied that gender, or any discussion of compensation, were factors in an unusually brusque execution.

Nevertheless, the episode has ignited another volley of complaints about the treatment of women in a journalistic craft that for many years was indisputably dominated by males. That was so both in the actual gathering and writing of news and in editorial direction of the process.

The old "boys on the bus" have now been somewhat integrated by gender even as the stereotype of the hard-boiled, cigar-chewing editor of movie and television has continued in the newsroom. But woe to the arriving female editor who might exhibit overbearing manner with the bark off.

In my own experience in more than half a dozen newsrooms over the years, all with male top editors, the most effective of them were tough and demanding. Yet they all demonstrated a deft touch in dealing with their reporters, even as those editors gained celebrity in the glamorization of the Watergate era. For that matter, most female subordinate editors I encountered were similarly cool-headed, but sometimes they would draw male resentment over perceived "bossiness."

Two editors under whom I toiled in -- at Post during the Watergate years and later at the late-lamented Star -- acquired much notoriety beyond the newsroom, but also massive support and admiration within by cultivating hands-on relationships with their reporters. Less known but equally deft and revered were editors and at the .

According to a report, women in supervisory newspaper jobs have remained essentially static at about 35 percent over the last 15 years. A similar study put the average median salary for newspaperwomen at 87 percent of that paid newspapermen in the same jobs, better than the national average but still a notable gap.

The gender comparison was an issue in the Abramson case as well, with reports that she raised it with Sulzberger by contending she was being paid less than her predecessor, Keller. But the publisher denied it in a memo to the staff, saying her salary was "comparable to that of earlier executive editors" and that in her last full year "her total compensation package was more than 10 percent higher" than Keller's.

At a time when newspapers generally are in crisis over falling circulation and advertising, the job of running the newsroom is no bed of roses, whatever the personal style or temperament of the top editor. For now, probably comes off either as a Grinch or a front-line warrior for women's equality in the workplace, with the Gray Lady sporting a public black eye.

"Turmoil and Intimations of Gender Bias at The Gray Lady "